Beef prices are rising, but how long they will stay that way is still unclear 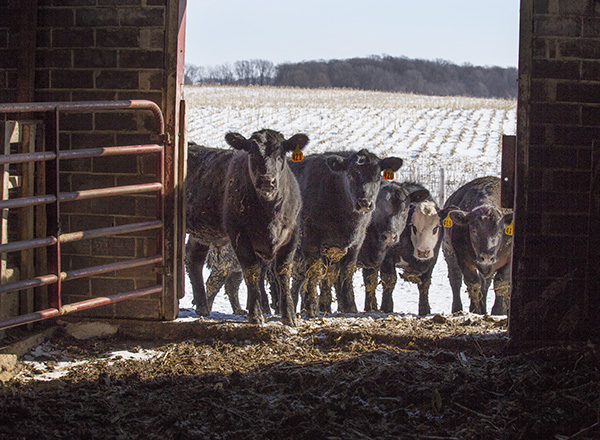 Sue and Steve Yost raise about 10 to 12 Angus cows each year on their farm, located about 1/2 mile south of Emmons. They’ve raised cattle since 2002. – Colleen Harrison/Albert Lea Tribune

Beef prices are on the rise, but the factors that lead to it — unlike the cattle themselves — are anything but black and white.

Area cattle producers Steve and Sue Yost, who raise about 10 to 12 cows per year, have a farm a half mile south of Emmons. 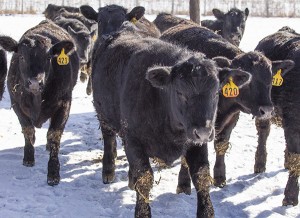 Sue Yost, the Public Health director for Freeborn County, said that the usual types of cows raised for beef are Angus and Holstein cattle. She and her husband, Steve, have about a dozen Angus cattle on their farm. – Colleen Harrison/Albert Lea Tribune

When the Yosts started raising cattle in 2002, they were selling their beef for 80 to 90 cents per pound. Last year they were able to sell for $1.50 per pound.

However, the price of cattle has a lot of variables, Sue said.

The Yosts have raised both Angus and Holsteins in the past, but are raising Angus this year. Despite Angus’s popularity, Sue said she can’t taste a difference.

“Honestly, I’ve eaten both and I can’t tell the difference myself,” she said.

Another variable that plays into cattle prices is the demand of beef itself — a big, early snowstorm wiped out herds of cattle in South Dakota in 2013 and there were droughts in California and Texas, Sue said, and the market is feeling that shortage now.

In 2013, a snowstorm swept South Dakota much earlier than expected, and the cattle weren’t prepared for it. This caused a lot of cattle to die. In the droughts, the cattle didn’t have grass to eat. 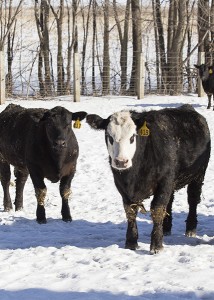 The Yosts typically get their cattle in November and then usually take them to market in Conger sometime in the summer. – Colleen Harrison/Albert Lea Tribune

Steve said while chickens and pigs can be kept in buildings, cows need an acreage to live on, which can leave them more susceptible to natural disasters.

This also makes buying cattle more expensive. The Yosts bought their cattle this year at about $2.20 to $2.70 per pound last November. They buy the cattle when they’re about 500 to 600 pounds, and purchase from people locally who have some for sale.

There are many other factors for the price of cattle too, the Yosts said — such as meat exports to other countries and their demands and working conditions for dock workers.

Steve said the oil prices also have an affect on the price of grain, but this year feed is half the price it was last year.

However, for Steve and Sue, things are going pretty well. They said they have some lifetime customers from the beef they’ve sold, which they sell at the Zumbrota cattle auction or to their friends.

They have also achieved representative sales at the auction from time to time, which means their cattle got the top price of the day.

Sue said when the animals are sent to auction, it’s best to group the cattle with other similar looking cattle. She said it’s what the cattle look like, so a larger animal might sell for less than expected.

Steve said it’s all about how they’re fed — the Yosts feed their cattle a mix of corn and feed which comes from Hubbard Feeds in Mankato. Steve said the feed from Hubbard is a compressed pellet that has all the minerals and vitamins the cattle need.

This year, the Yosts expect to have their beef ready to sell in July. They process the meat at Conger Meat Market.

Steve grew up on a dairy farm that had a few beef steers.

They started raising cattle after Sue’s mom found their current farm online, and the property had a barn on it, which led to the Yosts getting back into raising animals.

Starting weight of the cattle raised by the Yosts.

Price per pound the Yosts’ cattle sold for in 2014.

A focus on agriculture during the last year