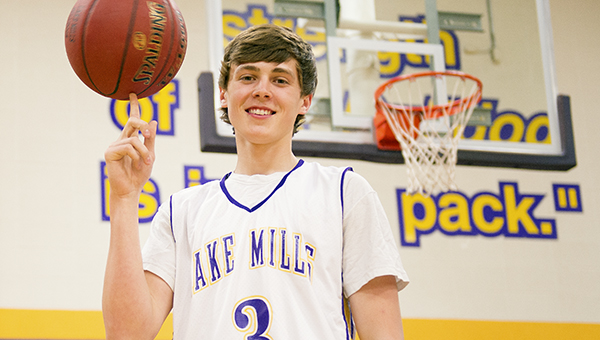 LAKE MILLS — The most accurate 3-point shooter in Iowa is the Tribune’s All-Area boys’ basketball Player of the Year.

Lake Mills guard Granger Kingland was the state’s only player to bury more than 60 3-pointers and make more than 50 percent of them.

“The way he shot the ball this year was unbelievable,” said Bulldogs coach Kyle Menke. “He was probably the best shooter in the state of Iowa, and the numbers back it up.” 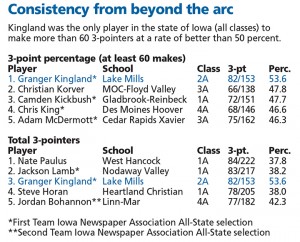 With 82 3-pointers, Kingland led Class 2A and was third in the state. West Hancock’s Nate Paulus made 84 to lead the state and Class 1A, and Nodaway Valley’s Jackson Lamb hit 83 to net Iowa’s second-highest total. However, Paulus and Lamb both shot less than 40 percent from beyond the arc.

“I’ve coached a lot of good shooters, but if I had to rank them he’d be No. 1,” said Menke after completing his 16th year as a head coach. “He’s got a quick release, great touch and shoots it with confidence.”

Along with being recognized by the Tribune and the North Iowa Conference, Kingland was a First Team All-State selection by the Iowa Newspaper Association.

On the roster, Kingland is listed as a 6-foot-4-inch shooting guard. However, after playing offensively on the wing, he would sprint down to the the block on the defensive end.

“It was different, but it was good for me because I just want to become a better player overall,” Kingland said. “My coach put me where it would be best for the team, so I was happy to play there.”

Kingland’s positive attitude was mirrored on the stat sheet. Aside from leading the area with 22.6 points per game, he was third in the area with 8.5 boards per game.

“We started five guards basically the entire year,” Menke said. “We didn’t have much size, but (Kingland) was very unselfish, and his role was playing a lot of post defense and expanding his game as a rebounder.”

In addition to stellar individual stats, Kingland led the Bulldogs to a 20-4 overall record, their best record in school history, Menke said.

One of the biggest wins for Lake Mills was in its second game of the season. The Bulldogs beat Forest City — a team that qualified for the state tournament — 66-60 with 28 points from Kingland, who was 6-of-12 from the field, 3-of-6 from 3-point range and 13-of-13 from the free-throw line. Josh Peters added 20 points and buried 3-of-5 3-pointers.

After amassing an 8-3 record, Kingland and Peters, a Second Team All-Area selection, led Lake Mills on a 12-game winning streak before an 86-73 loss at Forest City in the Class 2A District 4 semifinals.

“They made things a lot of fun this year and were one of the best duos in school history,” Menke said.

Peters was a Second Team All-Area selection with 16.7 points and 6.4 assists per game.

“I can’t tell you how many shots (Josh) would pass up to get somebody a little better look,” Menke said. “There’s not a lot of high school players who are capable of doing that.”

In the offseason, Kingland said he plans to attend basketball camps and play in the Lake Mills’ July Jubilee 3-on-3 tournament against Menke, who plays with his brothers.

“We’re really excited to have him back for his senior year,” he said. “We’re hoping that he will really work to expand his game even further. He’s the type of player who’s not satisfied with success. He’s always wanting to get better.”