Memorial services for Donna Mae Thon, 82, of Albert Lea will be at 11 a.m. Saturday at the Bayview/Freeborn Funeral Home chapel. The Rev. Al Stoa will officiate. Interment will be in Hillcrest Cemetery.Visitation will be one hour prior to the service. Online condolences are welcome at www.bayviewfuneral.com. 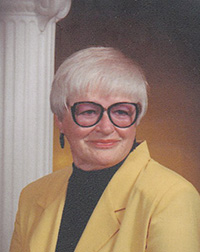 Donna Mae Christopherson Thon was born March 8, 1932, in Albert Lea, the daughter of Milton and Cora (Hansen) Christopherson. She was baptized and confirmed at First Lutheran Church. She graduated from Albert Lea High School and then went on to medical technician training in Minneapolis.

After living in Kentucky, North Carolina and Germany, Donna returned to Albert Lea in 1960 and began working for Louis and William Kuchera. After Louis Kuchera’s death she began working for Scotsman Systems in the industrial nurse’s office and remained with them for over 21 years. She then worked for Bayview Funeral Home and Johnson Floral.

Donna was a member of First Lutheran Church and was active in FLCW, the Altar Guild and was a life member of the Sons of Norway. She was very proud of her Norwegian heritage. Donna derived much pleasure in life with hobbies of traveling, reading, walking, crafts and floral arranging. Her pet hobby was cooking and baking as generations before her had blessed her with an aptitude for this. She loved to see and appreciate the humor in life and hoped she’d be remembered for her sense of humor.

Donna leaves behind a lifetime of memories and survivors, including cousin, Sharon Wood, and her family who became Donna’s extremely special adopted family; Jacquelyn Bellamy; Mike and Pat Seracki; Jim and Blake Bellamy; Scott, Jody, Paige and Corey Bratsch; cousin, Bill Stein, and family; and many others.

Donna was preceded in death by her parents; aunts Lyla Wood and Cora Hansen; cousins Edsall Wood, Helen Hanson Tiller and Duane L. Boyd; as well as many other aunts and uncles.