The greatest enemies of the United States, its freedom and its democracy are not terrorists from foreign land nor illegal immigrants trying to sneak across its borders. No, the greatest threat to our democracy is apathy. If people no longer care to participate in the democratic process, then that process itself is threatened; and if the process is threatened, then our government of the people, by the people and for the people may indeed perish from this earth. 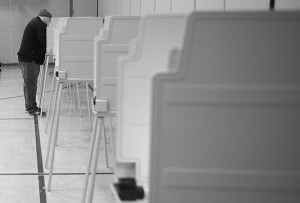 Consider: During the Vietnam War in the 1960s, when 18-year-olds could be drafted into the military, but could not cast ballots at the voting booth, a movement began to amend the Constitution and allow 18-year-olds the right to vote. The result was the 26th Amendment. Within four months of its passing the United States Congress, the amendment had been ratified, certified and became the law of the land.

Since that time, however, the numbers of voters ages 18-24 has declined steadily. In fact, in the last presidential election — the election that generally attracts the most voters — only about one out of four young citizens voted.

But it is not simply young people who do not participate fully in the democratic process. In the early 1960s, national voter participation in presidential elections hovered in the mid-60 percent range. Even off-year elections saw about 50 percent of the electorate go to the polls.

However, in our post-Watergate era, where cynicism about politics reigns supreme, the numbers have dropped by about 10 percent.

The percentage of voters going to the polls here pales in comparison to other countries like Australia, Belgium and Chile, where voter turnout hovers around 90 percent. Of course, in those countries, voting is compulsory.

Traditionally, Minnesota has been at or near the top in terms of voter turnout statewide. But according to the United States Election Project, which monitors and studies election turnout numbers, in last year’s general election, Minnesota dropped to just over 50 percent of eligible voters casting ballots. Yes, it’s still above the national average, but it’s a disappointing drop in the numbers.

That’s a good reason for the state Legislature to consider a bipartisan bill that is currently before it that would allow 16- and 17-year-olds to pre-register for voting. The bill would not lower the voting age, but it would allow the teens to register so once they hit that 18th birthday, they’ll be ready to vote.

Owatonna High School political science and history teacher Angela Sager likes the idea because, as she said, it could “increase participation in the election process and civic life in general” by getting the students in that habit of being a part of the election process.

We agree, and we like the idea of our state doing what it can to increase participation in our democratic processes.