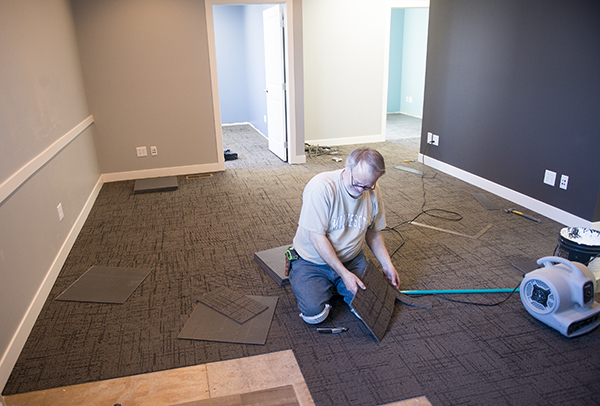 Carpeting is put in at the future site of an employee clinic Feb. 6. The clinic will be in the same building as Dr. John Enger’s podiatry practice at 904 E. Plaza St. in Albert Lea. -Colleen Harrison/Albert Lea Tribune

Those were some of the focus points behind area companies partnering on the construction of a private employee clinic, according to Lou-Rich General Manager Steve Tufte.

Alliance Benefit Group, Innovance — which encompasses companies such as Lou-Rich and Almco — Mrs. Gerry’s Kitchen, Select Foods and Zumbro River Brand are the companies whose employees will be able to use the clinic and its resources. 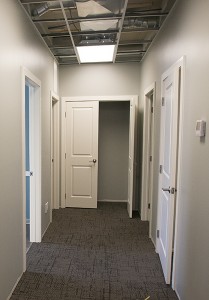 ABG consultant Mike Oothoudt said each company participating in the clinic and its opening has its own specifications when it comes to their eligible employees and the criteria to meet. He said any employees and their dependents enrolled in health care coverage through the company would have access to the clinic. Tufte said the same was true for Innovance employees.

Oothoudt said some of the reasoning behind the clinic’s conception was trying to help control the cost of health care benefit plans and increasing employee retention.

After seeing success with a similar clinic for Quality Pork Processors in Austin, such as a reduction in patient wait time and less emergency room visits for employees, a shared employee clinic seemed like an increasingly good idea, Tufte said.

He said the clinic will offer basic services found in standard doctor visits, such as strep throat testing and vaccinations, among others. There will be a pharmacy, he said, that will offer basic prescriptions — a list of which he said would be determined based on employee needs. He said there would most likely be some lab services as well, and assimilated the clinic to an urgent care center.

Oothoudt said the clinic would cover primary care — such as sinus and ear infections, pregnancy testing, simple lacerations and women’s health, among others; as well as preventive services — such as routine labs and cholesterol profiles and stress or depression; along with the management of chronic conditions — diabetes, asthma, tobacco use and allergies, to name a few.

“Hundreds of things can be done there,” he said.

Oothoudt said this would be the first shared clinic any of the companies have taken part in and that the companies would have their own agreement on how the clinic would be paid for.

He said the concept was brought to a human resources meeting in Albert Lea after other private clinics were visited. The visits to other clinics showed what services worked for employees and which ones helped them in staying with their employers. 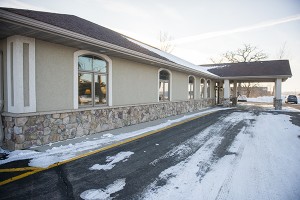 The employee clinic was projected to open around Feb. 16, according to Alliance Benefit Group’s Mike Oothoudt during an interview in early February. – Colleen Harrison/Albert Lea Tribune

Oothoudt said a driving factor behind a private clinic was the problem of employees using providers less due to higher deductibles. The clinic could be a solution.

Tufte said the clinic services come with no change to benefit deductions from Innovance employee pay, and that there are no copays for employees using the clinic. He said the employers are charged a lower cost for each service over time.

The clinic’s health partners total a monthly cost for the services provided, according to Tufte, and then bill each participating company separately based on how many employees used the clinic that month and for which services.

Oothoudt said the clinic had a projected opening date of Feb. 16. It will be in the same building as Dr. John Enger’s podiatry practice at 904 E. Plaza St. in Albert Lea.