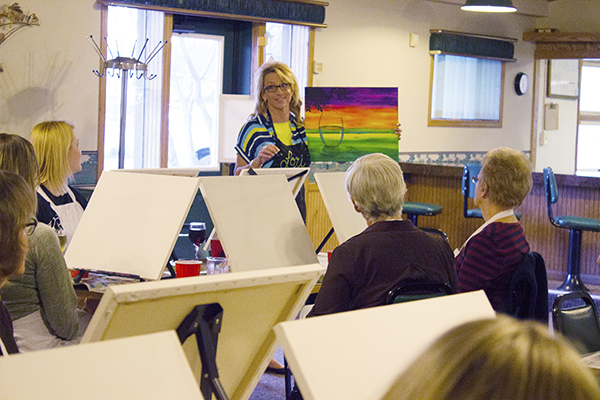 Lori Miller shows the painters what painting they will be creating, which is titled “A Perfect View.” – Hannah Dillon/Albert Lea Tribune

Albert Lea native teaches residents how to express themselves through art

Three women from Rochester are giving Albert Leans the chance to express themselves artistically, even if they’ve never painted before.

One of those women, Lori Miller, is an Albert Lea native herself. 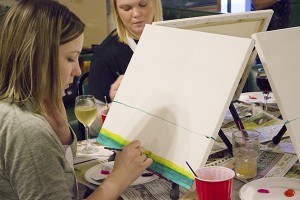 Most painters at the party were beginners, if not first-time painters. – Hannah Dillon/Albert Lea Tribune

Miller is co-owner of The Urban Easel, which has its studio in Rochester. She, Elise Tensley and Elin Johnson have owned the studio for a little over a year.

The studio has classes going every day but Miller, Tensley and Johnson do traveling parties as well.

Despite being based in Rochester, Miller said she comes to Albert Lea a lot. She also travels to Austin, Owatonna, Red Wing, Winona and Iowa frequently for parties.

Miller said everything has been going great in the first year, but she somewhat expected that. She said once people go to one class or host one party, they want to do it again and again.

She also said she feels Albert Lea has a need for artistic expression, and her classes help tap into that.

Normally classes have about 30 people and most of the painters are beginners, if not first-time painters. However, she said she has a lot of repeat customers.

Usually Miller teaches classes at the 112 on Broadway, Green Lea Golf Course or the Albert Lea American Legion when she’s in Albert Lea. 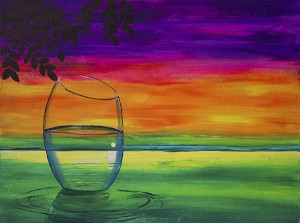 However, classes are offered at the Urban Easel studio during the week, and there is open studio from 1 to 4 p.m. every Sunday. During open studio there is no instruction, but artists are available to help if needed.

The Urban Easel also does kids parties and private parties.

While Miller is originally from Albert Lea, Tensley is from Rochester and Johnson is from Sweden, but now lives in Rochester.

The three women met while working at another place and decided to open their own art studio together.

Miller has been an artist since she was a child. She said she has always been drawing, painting or doing something. Since it’s something she loves to do, she said she doesn’t see working at the Urban Easel as work.

While Miller has a “day job” as a licensed childcare provider, she said Tensley and Johnson are full-time artists.

The Urban Easel will next be in Albert Lea on April 18. Go to theurbaneasel.com and check the class calendar for classes at the Urban Easel studio or other traveling classes.