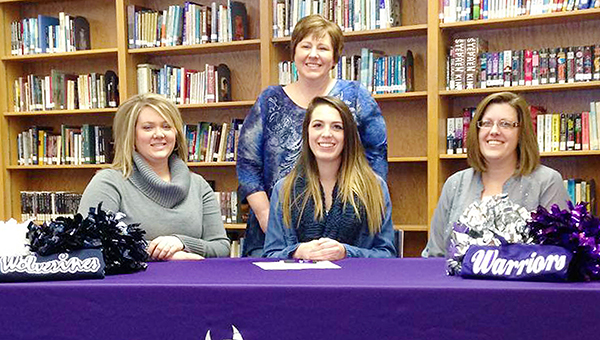 The Waldorf cheerleading team strengthened its roster with the addition of Kristen Hahn.

Hahn, a senior at Glenville-Emmons High School, signed a letter of intent with the Warriors on Wednesday, according to a press release.

“We are pleased that Kristen decided to join the Waldorf cheer squad next fall,” said Waldorf coach Dyanna Quisling. “I’m excited to have her on the roster and look forward to her contributions on the squad.”

A five-year varsity letter winner at Glenville-Emmons, Hahn served as a back base and flyer for the Wolverines. She helped Glenville-Emmons record solid performances in National Cheerleaders Association events each summer.

“She comes from a small squad that continually receives high honors at NCA camps and rivals larger schools on the sidelines,” Quisling said.

Hahn, a native of Hayward, is the daughter of Brenda Hahn. She plans to pursue a communications degree at Waldorf with an emphasis in graphic design.

Growing up in a small town, Hahn knew she wanted to continue her education at a small college.

“When I first visited Waldorf in the fall, I immediately fell in love with the campus and the close-knit community,” Hahn said. “The faculty and staff made me feel welcome and at home. I felt like I made a personal connection to Waldorf and that I was more than just a number there.”

Cheerleading has been part of Hahn’s life since she was an eighth-grader. Joining the Warriors, she’s presented with the chance to further her skills in the sport.

“To continue cheering into college is really a dream come true,” Hahn said. “Cheerleading is my passion. Four years ago, I never would have dreamed that I would be taking cheerleading to a collegiate level. I feel so blessed and thankful for this opportunity.”

Hahn is the 13th member of Waldorf’s 2015-16 recruiting class and is the second Glenville-Emmons cheerleader to sign with the Warriors, joining Wolverine teammate Rachel Hagen.

Hahn joins Waldorf’s program at an exciting time. The Warriors enter their first year of National Association of Intercollegiate Athletics competition next spring.

“I look forward to working with her in the coming seasons,” Quisling said. “She has such a positive attitude and is truly committed to becoming the best cheerleader she can be.”