GOP splinters over what to do with surplus funds

ST. PAUL  — Minnesota’s Republican Party launched a wave of ads Tuesday putting pressure on state lawmakers to return all of a $1.87 billion budget projected surplus to taxpayers, which is more than even the GOP House majority has publicly embraced. 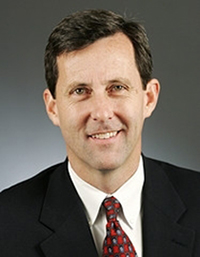 Party Chairman Keith Downey framed the “give it all back” rallying cry as a starting point, but it also sets him apart from House Speaker Kurt Daudt and other high-ranking GOP legislators. Several influential lawmakers are advocating for some of the surplus to go for transportation, education and nursing homes.

“The Republican Party of Minnesota says send it back. Send it all back,” Downey says in a TV ad where he promotes the idea of a $350-per-person tax cut.

Downey said at a news conference that he hopes the roughly $150,000 ad campaign will stir the public to demand tax cuts over new spending. He said it’s only fair to enact tax cuts with the full surplus because it comes not long after a run of all-Democratic Statehouse control that resulted in higher taxes and increased government spending.

Daudt said the House GOP is still working out its budget goals, including how to handle the surplus. Daudt told reporters Tuesday that House Republicans may go further with tax relief than the plan he outlined last month to earmark at least $900 million for tax cuts while also pumping money into education, nursing homes and transportation. He said Republicans may reroute projected spending increases in the state’s budget for their own priorities and instead devote the entirety of the surplus to tax relief.

“Will every Minnesotan receive benefits? Probably not,” Davids said in an interview with The Associated Press. “It’s not going to be straight across the board. I would say the majority of Minnesotans are going to see some tax relief in the House tax bill.”

Davids, R-Preston, said he’s poring over a pile of tax-cut requests, which include exempting Social Security or veterans benefits income, expanding child care credits and phasing out a state property tax on businesses.

Estimates the Revenue Department prepared at AP’s request show how expensive it could be to deliver tax cuts with a wide reach. Cutting income tax rates by 1 percentage point in all four brackets would consume $2.9 billion. Slicing the sales tax by a percentage point would chew up $1.59 billion. Taking a percentage point off the corporate franchise tax is relatively cheaper, coming in at $224 million.

Lawmakers could shave the costs by gradually enacting breaks or by chopping rates at smaller increments.

“His insistence on ideological purity pits him against fair-minded Republicans who are trying to do the job they were sent to St. Paul to do,” Martin said. “Who’s in charge here: the speaker of the House or the chairman of the Republican Party?”

The Minnesota GOP still has more than $1 million in debt from past elections. Freshman GOP Rep. Kelly Fenton of Woodbury, a former state party deputy chairwoman, said the ad campaign is perplexing.