On Saturday evening, March 14, 2015, in Blessing Hospital in Quincy, Illinois, the Lord put his hand on Helen J. (Broskoff) Espe’s shoulder and told her, “No more pain and suffering,” as the angels came and took her to her heavenly home. 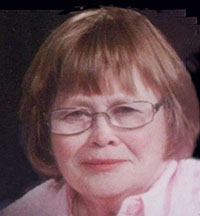 Helen was born July 2, 1935, in an upstairs apartment to Christ and Lois (Bull) Broskoff. She was born with Cerebral Palsy, but that never slowed her down. She married Paul Robert Espe Jan. 3, 1958. He preceded her in death Dec. 6, 2012.

“Don’t grieve for me for now I’m free, I’m following the path God laid for me. I took his hand when I heard him call. I turned my back and left it all. I could not stay another day, to laugh, to love, to work or play. Tasks left undone must stay that way. I found that peace at the close of the day. If my parting has left a void, then fill it with remembered joy. A friendship shared, a laugh a kiss, Oh, yes, these things I too will miss. Be not burdened with times of sorrow. I wish you the sunshine of tomorrow. My life’s been full: I’ve savored much, Good friends, good times, a loved one’s touch. Perhaps my time seemed all too brief. Don’t lengthen it now with undue grief. Lift up your hearts and share with me.God wanted me, now he set me free.” — I’m Free

Helen graduated from Albert Lea High School in 1953. After graduating she and her friend Mary Lou Anderson went to San Francisco to work. She worked as a typist. A year later her mother got sick and eventually died. Helen went home to help her mother and her younger siblings.

After her marriage to Paul, they lived in Austin. She worked at Austin Achievement as a secretary and book-keeper. In 1968 she was starting to have balance problems and was unable to work outside the home. She started to do personal laundry for 300 people at Raymond’s Nursing Home. In 1977 they bought Yucatan Supper Club in Yucatan. Helen would tell people, “Paul had never bartended before and I had never cooked like that, but we were fast learners.” While in Austin, she belonged to Westminster Presbyterian Church and was active in two circles and belonged to Mapleview Women’s Club. She was a scout leader and den mother for Scott’s troop.

In 1987 Helen developed asthma and had pneumonia so they sold the supper club. They bought a Victorian house in Spring Grove and made it into Touch of the Past Bed and Breakfast. Helen’s wish had been to be an interior decorator so this was her chance. After Paul retired they moved to Quincy. She belonged to Faith Presbyterian Church and the breast cancer group at Blessing Hospital.

Paul and Helen traveled all over the U.S., including Hawaii. They also traveled to the Caribbean, Canada, Japan, Hong Kong, Thailand and Singapore. One of her dreams was to go on a “play trip” to New York City, and Andre fulfilled her wish in 1996.

Memorials may be designated to Faith Presbyterian Church, Sunset Home or Susan B. Komen for the Cure.