Leona was born Nov. 7, 1933, to Arthur and Sadie (Minder) Lien. She is preceded in death by her parents, siblings, in-laws and husband, Arlen Hoverson. 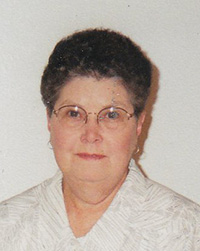 She is survived by her daughter, Char (Hoverson) Butterfield, and husband, Steve; her son, Rick Hoverson, and wife, Teresa; her grandchildren Stacey Champion, Sarah Hoverson and Zach Hoverson; and great-grandchildren Zoe and Zane.

She was a life-long resident of rural Albert Lea.

Leona — also known as Nana — was kind, joyful and adventurous. In her younger years she owned an antique shop with her husband, Arlen, called Bedknobs and Broomsticks and enjoyed treasure hunting. She always secretly wanted to be a fashion designer and would make paper dolls and outfits for her daughter and granddaughters. She lived for her grandchildren and took them park hopping and traveled extensively with her adult granddaughter, Stacey. She loved gardening, animals, crossword puzzles and reading.

Her family wishes everyone who cared for her in later years after she developed Alzheimer’s would have had the chance to know what a compassionate and vibrant woman she had been. It is like the Groundhog Day of mourning, and they’re happy she is now in a more peaceful place.

Visitation and services will be at 1 p.m. Saturday with the funeral beginning at 2 p.m. at Round Prairie Lutheran Church, 12881 757th Ave. in Glenville. Bayview/Freeborn Funeral Home is assisting the family. Online condolences are welcome at www.bayviewfuneral.com.

In lieu of flowers, the family asks that donations to be made to the Alzheimer’s Foundation or hospice services in Leona’s memory.