Funeral services for Linus P. “Lin” Dirkes of Albert Lea, will be at 3:30 p.m. Tuesday at St Theodore Catholic Church. The Rev. Timothy T. Reker and Deacon Mike Ellis will officiate. Interment will be in St. Theodore Cemetery. Military honors will be accorded by Albert Lea veterans organizations. Visitation will be from 2 until the time of the service at the church. Bonnerup Funeral Service is assisting the family with arrangements. 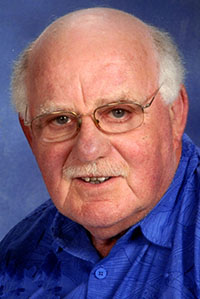 Lin passed away at his home on Thursday surrounded by his loving family, after a yearlong battle with congestive heart failure and cancer. He was 74.

Linus was born on Aug. 10, 1940, in Albany, Minnesota, the son of John and Hildegard (Thome) Dirkes. He graduated from high school with the class of 1958. Following graduation, Lin was planning on entering the service, but his father was in an accident, and Lin stayed home for a year and helped with the family and the farm. He later served in the U.S Army Reserves for seven years.He was united in marriage to Diann Gaebel on June 23, 1962, in Freepor. They lived in St. Paul and Lin went to barber school. In 1975, Lin and Diann moved and made Albert Lea their home.

Lin barbered for more than 40 years, owning the Barber’s Shop in downtown Albert Lea, then Cost Cutters at Northbridge Mall, and later in his home.

Lin and Diann also were depot managers for the Minneapolis Star Tribune for more than 22 years.

In his spare time, Lin did lawn service and carpentry to remain busy.

He was a member of St. Theodore Catholic Church where he served as a eucharistic minister for many years. Linus was also active in the Knights of Columbus and the American Legion. Lin was a quiet, loving, gentle man who didn’t want to be fussed over by others. Putting others before himself was a trait he possessed.

He was a great outdoorsman, enjoying golf, fishing and camping. Lin adored his grandchildren and loved to watch whatever activities they were participating in.

In lieu of flowers memorials suggested to Albert Lea Hospice or the American Cancer Society.