Funeral services for Marian D. Weseman, 89, of Albert Lea will be at 10:30 a.m. Thursday at St. Theodore Catholic Church. The Rev. Timothy Reker and Deacon Mike Ellis will officiate. Interment will be in St. Mary’s Cemetery in Newry Township. Visitation will be from 4 to 6 p.m. Wednesday at the Bayview/Freeborn Funeral Home and one hour prior to the service at the church on Thursday. Online condolences are welcome at www.bayviewfuneral.com. 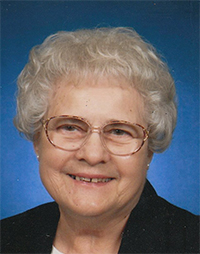 Marian Dorothy Weseman was born on Jan. 30, 1926, in Faribault, the daughter of Eli and Dorothy (Poirier) Caron. She grew up and went to country school in rural Freeborn County. She graduated from Blooming Prairie High School in 1943. On Nov. 21, 1944, Marian was united in marriage to Lewis H. Weseman at St. Mary’s Catholic Church. She was a member of St. Theodore Catholic Church and a 37-year member of the American Legion Auxiliary.