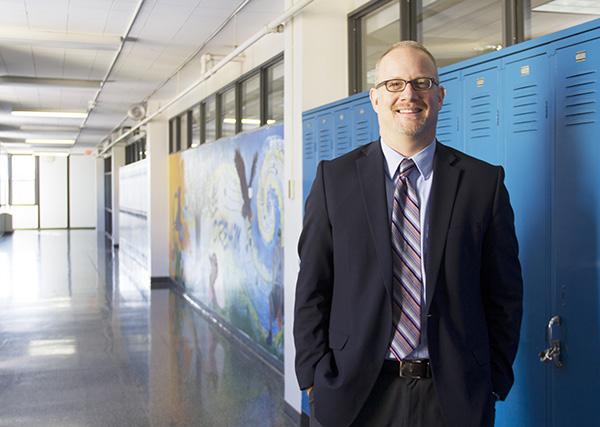 Steve Kovach of Northfield has been the principal at Southwest Middle School for one and a half years. Prior to his job in Albert Lea, he worked multiple capacities in Lakeville Area Public Schools. -Sarah Stultz/Albert Lea Tribune

With one year under his belt, Southwest Middle School Principal Steve Kovach is making some notable changes to improve student achievement at the school.

Kovach, who replaced former Southwest Middle School principal Jean Jordan, came to Albert Lea at the start of the 2013-14 school year after 20 years in the education field.

Kovach said his career started in Lakeville Area Public Schools. He substitute-taught in the St. Paul, Lakeville and Cottage Grove area until he got a teaching position as a social studies and economics teacher in 1993, teaching 10th- through 12th-graders.

After about 10 years, he got tapped to lead a district committee and gradually eased out of the classroom. He eventually became an administrator at a few middle schools.

“Next thing I know it was my 20th year in the district up there,” Kovach said.

Coming from a middle school with sixth through eighth grades, he said he was attracted to Albert Lea’s middle school, which only has sixth and seventh grades. He heard about the job from Jim Quiram, director of technology and human resources with Albert Lea Area Schools. The two had previously met while working to obtain their administrative licenses.

Kovach said his first year at Southwest he focused on listening and learning what culture was already put in place by Jordan before his arrival. He said he wanted to build off of those initiatives and started looking further at the achievement of the students.

In January, the school began what is known as the Tiger Plus program, where students get time during the school day twice a week to get extra instruction or to complete assignments they may be behind on. It is held during what is normally an advisory period for students. Within that program there is a special section called Plus 1 for students who are either failing at least one class, are missing multiple assignments or are refusing to do work.

Kovach said teachers give additional instruction and oversight to these students, and students who are succeeding may even be given the opportunity to tutor students in need.

Some teachers have even offered additional classes on other curriculum not required during the school year for students who are not behind on work during Tiger Plus.

The principal said the program has been a success thus far and is allowing the staff to get an even closer look at each student. Students are able to get remedial help during the school day instead of having to come early or stay late.

“It’s been pretty awesome,” he said. “Teachers are seeing the possibilities.”

He said people are already asking to have it more than just two days a week.

Another change happening at the school is the sixth- and seventh-grade social studies teachers are conducting a Chromebook pilot project where there are carts of Chromebooks available for the students to use. This may expand into online textbooks.

The school has implemented a grab-and-go breakfast for students to utilize in the mornings that does not require them to stay seated in the cafeteria while they eat their breakfast.

Southwest is also working alongside the Statewide Health Improvement Project and the Blue Zones Project and will soon become one of the first to become a Blue Zones-designated school.

Kovach said outside of school he enjoys spending time with his wife and children, reading, attending Minnesota Wild games and staying in shape. He said he listens to audio books frequently as he has a drive to and from work each day. He also enjoys hunting and fishing.

Interesting: Kovach describes himself as a hockey fanatic. He grew up in South St. Paul and played hockey from the age of 3 up through when he was in college.