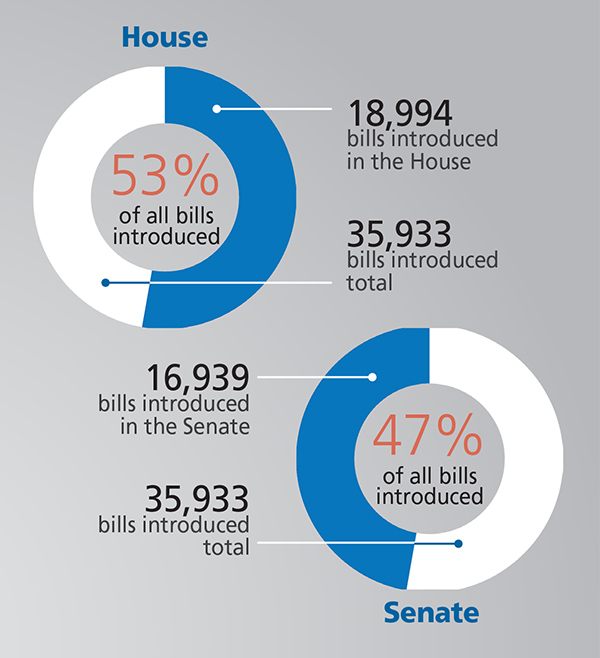 Dozens of bills are introduced in the Minnesota House of Representatives and Senate each week during the legislative session.

But according to the Minnesota Legislative Reference Library, only one out of every 23 bills introduced in the last 10 years were passed into law.

District 27A Rep. Peggy Bennett, R-Albert Lea, said after seeing the process firsthand she thinks the system works the way it is supposed to.

She said she has been amazed at the “mountains” of bills she has seen, and with that the pages and pages of paperwork that come with them.

“I can believe it that most of them don’t become law,” she said. If a bill is worth passing, it must go through various committees and then either get added into an omnibus bill or brought onto the floor by itself for a vote.

As of Thursday, legislators had introduced 1,850 bills in the House and 1,724 in the Senate so far this year, according to the library.

Three bills have been signed into law.

Bennett said she is chief author of three bills but has co-authored about a dozen.

She is chief author of two education-related bills, one that would establish a teacher loan forgiveness program to address teacher shortages across the state and another that would reduce the number of required tests for students.

“I’m just careful what I sign on to,” she said. “I’ve committed to reading every bill before I sign it.”

She said when people come up to her and ask her to sign a bill, she tells them she will take a look at it, but she needs to get a copy that bill first.

“As a new person I don’t want to take so much on that I lose track of them or I don’t do a good job pushing my bills through,” Bennett said.

The Tribune was unable to reach District 27 Sen. Dan Sparks, DFL-Austin, as of press time.