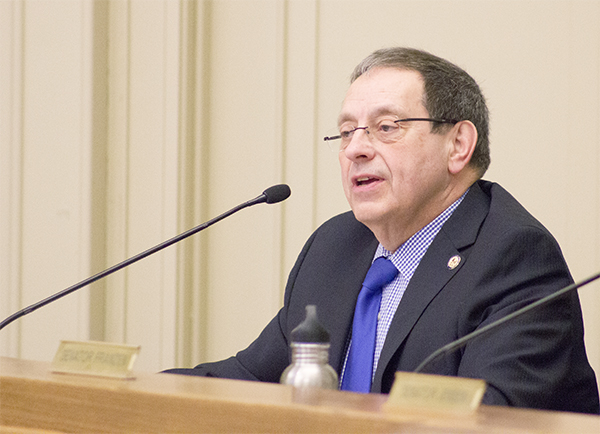 Residents and officials from across southern Minnesota on Friday aired concerns about aging infrastructure and a lack of transportation funding, calling on legislators to find a long-term funding solution.

The comments were made during a public hearing in front of the Senate Transportation and Public Safety Committee at the Freeborn County Courthouse. The committee made stops in Albert Lea, Geneva, Wanamingo and Cannon Falls to tour projects, hear presentations and take public testimony.

“Transportation infrastructure is a vital tool for the state’s economy, and for keeping and maintaining healthy communities,” said Sen. Scott Dibble, DFL-Minneapolis, chairman of the committee. “However, increasingly the demands of our growing state are straining our existing infrastructure. Every corner of the state is feeling this pressure.”

Dibble said investing in Minnesota’s transportation network is an economic opportunity for the state.

“We can create jobs now, and we can see increased economic development down the road, while making commutes safer and easier,” he said. “Investing in a 21st century transportation network is the foundation for a strong economy now and in the future, and will improve the quality of life for everyone.”

The discussion comes as Gov. Mark Dayton released a list of 600 projects across the state that could be funded as part of his solution to the transportation crisis.

Dayton’s proposal calls for a new 6.5 percent wholesale gas tax, increased vehicle registration and license fees, a half-cent metro area sales tax increase for transit projects and efficiencies in the Minnesota Department of Transportation, among others.

Albert Lea City Engineer Steven Jahnke said the city alone has $36 million in projects that need to be completed in the next five years. He said the city has struggled with finding money to pay for its road repairs and noted that in 2006 the council and staff made a decision to not reconstruct a road until it is 75 years old, meaning it has to be overlaid three times before it is reconstructed. He said it hurts everyone in town.

Freeborn County Engineer Sue Miller said the county has one of the largest transportation systems in the state, including 628 miles of highways.

She said the Freeborn County Board of Commissioners is using all of its tools available to raise money for road projects, including a wheelage tax and bonding. It is now considering a local-option sales tax.

In her time as county engineer in the last 15 years, she said bituminous prices have almost tripled, which limits the projects that can be completed.

Randy Kehr, executive director of the Albert Lea-Freeborn County Chamber of Commerce, talked about the effect roads have on businesses in the area. He said many industries in the county depend heavily on roads for transporting their products all over the country.

At the same time, he pointed out that a significant increase in a gas tax could mean making the area less competitive with neighboring states.

Mike Larson, CEO of Innovance, talked about precision products his company makes that have to be put in a certain way on the trucks when they are being sent out because they have been damaged from the conditions of the roads.

David Ring, a representative with Kwik Trip, said his company is opposed to a gross receipts tax and said it would hurt middle and lower income residents. In addition, rural residents would suffer more because they tend to driver further distances.

Farmers also spoke, discussing how the roads impact their business, along with representatives from Owatonna, Northfield, Oronoco and Windom, to name a few.

“We can no longer be putting a Band-Aid on our transportation network,” Stiehm said.

Fifth Ward Councilor Larry Anderson, who provided a welcome to the committee in the absence of Mayor Vern Rasmussen, said municipal state aid is not keeping up with increased costs.

With all the projects that need to be completed in the next five years, municipal state aid funding would not even cover 10 percent of that total cost, Anderson said.

“The funding shortfall will place an enormous burden on the taxpayers of the city of Albert Lea,” Anderson said. “We, the cities in Greater Minnesota, desperately need your assistance in closing the funding gap to provide safe corridors of commerce.”