Pssttt. Hey, you. Yeah, I mean you. It’s me speaking. The old red barn near the Kiester Hills. I’m guessing that very few of you readers have ever seen me or heard from me as I’m tucked away on an old abandoned farm acreage near a seldom-used township gravel road a few miles from the main highway and somewhat hidden by the large grove of trees. So why am I talking to you? 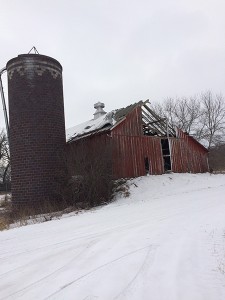 The old red barn by the Kiester Hills hearkens to farming years past. – Provided

Well, I just heard from a reliable source that I will soon be torn down, smashed, buried in a big hole and finally covered up by the Mother Earth that I was built on. I’m sure my demise won’t show up in the death notice column in the local paper and there will probably be no obituary for people to read. So before I’m no longer around and just some past undocumented history, I would like to say a few things to you about myself.

I’ve probably had three to four farm owners in my lifetime. And sad to say, the current owner no longer has any use for me so I’m now obsolete. I knew that my time on Earth was getting short as many of my fellow barn friends have disappeared from the local landscape in recent years. For most of my lifetime, I could see up to 10 farm barns over the horizon. Now I can see only one across the barren field. And probably that one also has its days numbered. I’m sure my current farm owner needs just a little more land for a larger farm profit.

I was probably built in the early 1930s. Actually, I’m too old now to remember the exact year. This makes me well into the 90s for my age. I’ve seen many good productive farm years, a few bad farm years and years where the owners have struggled just to exist and make the payments to the bank. But somehow, we all survived. I’ve felt summer temperatures of over 100 degrees and winter temperatures of 20 degrees below zero with very strong winds. But I’m still standing. Very few metal nails were used when I was built from local timber as most of my wood frame was held together by wooden pegs. Boy, oh boy was I a beautiful sight when I was built. I thought I was a castle. For a while I was the best looking barn in the township with a bright coat of red paint, white trim, a shiny metal roof, four tall lighting rods and a big weather vane on top of the large domed-shaped cupola. I had new pulleys and a long trolley under the roof to hoist the bales up to the hay loft from the hay wagons.

In the early days, like all of my fellow farm barns, I was the farm building with the most activity. I was used seven days a week and 365 days a year, providing shelter and a home for the 12 milking cows that were milked twice a day. The mornings always started early as the farmer showed up at 5 a.m. for the morning milking and then came back at 5 p.m. for the evening milking.

Also, there were always a few young calves in the barn pens, sometimes a few pigs and in the early days four work horses were housed there that were used for the farmer’s fieldwork before the modern tractors took over. And just to set the record straight, the brown cows didn’t give chocolate milk. And yes, there were always about a dozen cats that called my barn home. They couldn’t wait until the milking started as they always got a good supply of fresh, warm milk from the farmer. I also had a large storage area in the hay loft where hay bales were stored for the milk cows to eat and straw for their bedding. I even got electricity sometime in the early 1940s and then only used the old kerosene lanterns for light if the electricity went out during storms.

I can still hear the faint sounds and laughter of the farm children playing games in the barn and swinging on the barn ropes hanging from the wooden beams. And believe it or not, I even had a barn dance one time when one of the farmer’s daughters got married. Oh, sometimes people made fun of my name like saying, “Were you born in a barn?” if you left a door open in the house and the cold air came in. Or if your fly was down in your trousers, people would say, “Your barn door is down.”

What glorious past memories I hold onto. But to be truthful, I’m now old, tired, spent, my wood frame is bending, the stone foundation is crumbling and I’m about to fall over. And the cold north winter winds continue to shake my whole body.

However, I have no regrets for my lifetime. I have served my farm owners well and am proud of it. I haven’t been used for anything for the past 20 years. My roof is now battered and has a big hole in it so I sometimes get wet inside when it rains and in the winter snow blows in. My once bright red paint is now faded, most of the windows are broken, my wood frame is leaning, the lightning rods are broken off and my weather vane is rusted in one position. The original farm yard light no longer is on as the electricity has been disconnected for many years and the only light I have now is nature’s sun and an occasional bright night moon. Yes, I still have a few feathered friends visiting me and a couple of cats that seek shelter. I wonder where they will go when I’m gone?

So I guess this is the last time you will hear from me. The few area farmers that I still have around me will probably just give a quick glance and then go on with their daily field work when the big rigs arrive soon to take me down, bury me and cover me up. I can’t complain though as I have had a good productive life. Hopefully there will be a few local people yet that will remember me. But that will soon pass and be short- lived as the new generations form. My only regret is that I will have no marker where I will be buried and no one will ever visit me at my grave site. But I guess that’s OK, as I was just an old barn. Summer corn fields will now hover over me and the winter ice and snow cover me. Well, I’ve got to go now, as I see that the sun is now setting to the west and the end of the day for me has now come.