One healthy change at a time 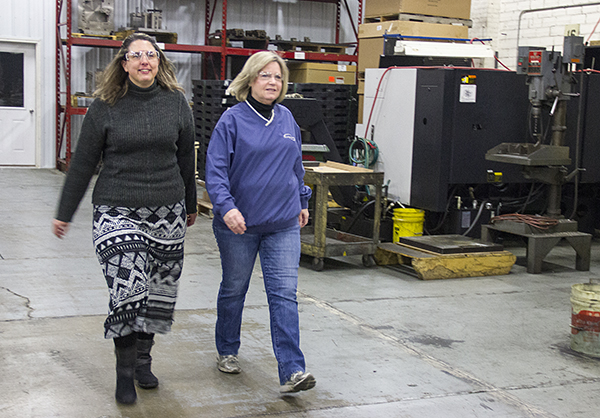 Laura Garza, human relations assistant at Lou-Rich, walks with Cindy Farr, project engineer in early February in the plant. People walk around a path in the plant on their breaks to get some exercise. – Sarah Stultz/Albert Lea Tribune

Albert Lea businesses are jumping on board to make healthy choices easier for their employees.

As part of the Blue Zones Project, leaders at the worksites hope to make their businesses not only healthier but happier, too.

She said healthy employees not only improve health insurance costs, but also productivity in the company.

“Everybody wins in the long run,” Baerman said. 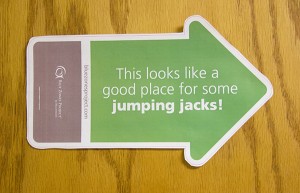 Signs like these are posted all over Freeborn-Mower Cooperative Services to remind employees to take a little break and move during the day. This one was placed next to the copier. – Sarah Schultz/Albert Lea Tribune

She said having a healthy workplace is a benefit to both the employee and the employer.

“If they cost less and they produce more, you’re probably going to be able to pay them a little more,” she said.

Healthy employees have good social networks at work, enjoy what they are doing and have less absenteeism, she said. 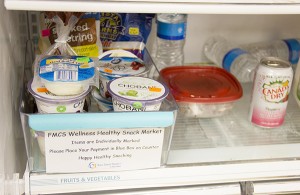 She said the worksite initiative is crucial to the overall Blue Zones Project and is a way to reach out to a large group of adults who might otherwise not be involved.

“Without them we can’t succeed,” Kehr said. “Worksites are where you can really, really reach people.”

Kehr said it was her goal to get 20 businesses registered for the project by the end of January. Then they can each work to complete the requirements.

Freeborn-Mower Cooperative Services was the first workplace to be designated as a Blue Zones worksite in January and has implemented dozens of tools to help employees be healthier.

Judy Jensen, who works in payroll and accounting at Freeborn-Mower, said her company has implemented everything from annual biometric testing, a healthy snack station, healthy reminder cards throughout the building and at work stations, and even yoga classes after work.

She and others have measured the distance of different walking paths inside and outside of the building and the number of steps it would take to complete them.

Jensen said Freeborn-Mower’s next wellness day is slated for Feb. 26, and they plan on having a Blue Zones theme.

While some of the initiatives were already in place before the Blue Zones came back to town, Jensen said they took those a step further.

“We see the value in the Blue Zones Project in the community as a whole and wanted to do our part as an employer,” Jensen said. “It’s about creating an environment where it’s easier to make healthy choices, and we just wanted to play our part in that.”

She said it is not about having a diet and exercise program — it’s a way to make simple changes in surroundings to make healthy choices easier.

Baerman said at Cargill, a dietitian has come out and shared tips in different sessions, they have had biometric screening for nonunion employees and they have plans for a garden.

They are giving their employees the incentive of getting a Fitbit tracker if they attend upcoming purpose workshops.

There are signs in the parking lot to encourage people to park at the end of the lot and walk longer to get to the building.

She said while not everyone at the plant is participating, she thinks it will catch on to more and more people as people see the changes from the participants.

They have continued those initiatives and implemented many more.

Farr said once a month doughnuts are brought in to the building. A few years ago, they started having fruit brought in, too.

“The bananas, apples and oranges in the beginning were not widely eaten,” she said. “They seemed to be what was left over. Now, actually the rolls are the last thing consumed.”

People are having an option to get desks that can adjust to standing or sitting.

They have started a new lifetime healthy weight program, which motivates people to either lose weight or maintain their weight, depending on their weight range.

“It’s a way we’ve been trying to get around the rapid weight loss and more of a healthy change to lifestyle,” Farr said.

In addition to efforts at individual businesses, the Albert Lea-Freeborn County Chamber of Commerce has had a strong worksite wellness committee even before.

30: Percent of the employees in Freeborn County who work on a tobacco-free site

40: Percent of all deaths in the country that are premature and are due to unhealthy lifestyle choices such as tobacco use, poor diet, sedentary lifestyle, misuse of alcohol and drugs and accidents.

2/3: Fraction of American adults who are overweight or obese.