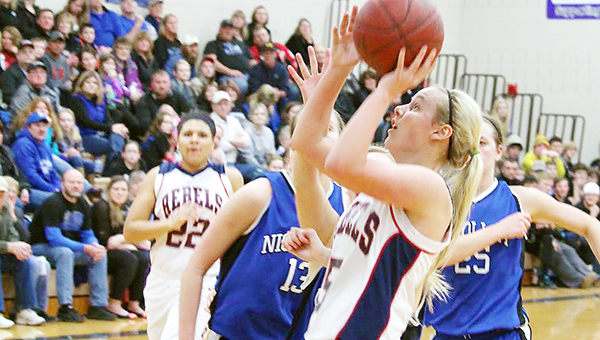 Anissa Janzig led the Rebels with 17 points and 15 rebounds, and five United South Central players scored in double figures Monday during a 75-56 win in the Subsection 2A South quarterfinals at Nicollet.

“They were really concentrating on our main scorers, and Kia and Caitlyn had season-highs in scoring,” he said. “The tournament’s a great time to do that.”

Lauren Allis and Taylor Schultz scored 10 points each and Shianne Robertson grabbed 10 boards for the Rebels.

“It was a team effort out there,” Hendrickson said. “A lot of girls contributed.”

Last season, the Crusaders edged the Rebels 48-41 in the Subsection 2A South finals to end USC’s longest postseason run since 1997. Mankato Loyola beat Lester Prairie/Holy Trinity in the section final to advance to the state tournament.

This season, the Crusaders defeated the Rebels 75-70 in overtime on Dec. 29 at the St. Clair tournament.