Funeral services for Richard R. Hogstad of rural Albert Lea will be at 11 a.m. Thursday at East Freeborn Lutheran Church. The Rev. Matt Griggs will officiate. Visitation will be from 4 to 7 p.m. Wednesday at Bonnerup Funeral Service and one hour prior to the service at the church. Interment will be in Geneva Cemetery. Military honors will be accorded by Albert Lea area veterans groups. 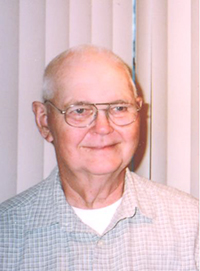 Richard was born June 7, 1932, in Blue Earth, the son of Sven and Lois (Zupp) Hogstad. He graduated from Grenada-Huntley High School and Austin Junior College.

Prior to moving to the Albert Lea area in 1973 he lived in Bloomington. Richard  was a member of East Freeborn Lutheran Church. He had been employed by Hormel in Minneapolis, then in Austin. He later owned and operated Dick’s Small Engine Repair in Albert Lea. Richard  served his country in the U.S. Army stationed in Korea and was a member of the American Legion and the Eagles Club.

Richard loved to garden, tinker with engines, maintain his fruit trees and — most of all — spend time with the grandkids.

Richard was preceded in death by his parents; brothers Fritz Werner and Jim Hogstad; and an infant stillborn twin brother.