Riverland Community College strides into the future with five-year plan 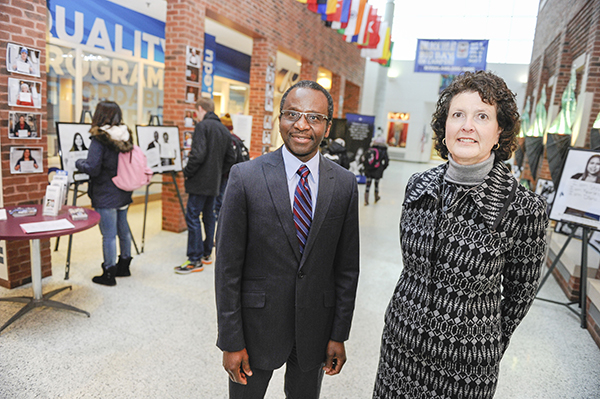 iverland Community College President Adenuga Atewologun and Vice President of Academic and Student Affairs Mary Davenport are spearheading the college into the future, laying forth their goals for the two-year school. – Eric Johnson/Albert Lea Tribune

Riverland Community College hit its 75th anniversary in 2015, but nobody is slowing down. In fact, things are speeding up.

Since Riverland released its strategic plan in the middle of 2014, leaders have been excited about the future. Vice President of Academic Affairs Mary Davenport said it is unusual for a new president to step in and start a project like this right away. But that’s what Adenuga Atewologun did after starting as president in July 2013. 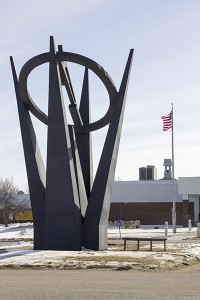 The focus for the Albert Lea campus moving ahead will be the transportation, green energy and industrial technologies center. – Sarah Stultz/Albert Lea Tribune

“The college was ready to go and the pace was set; the expectations were set, and I think that’s what’s making this strategic planning successful,” she said.

Atewologun noted the five-year plan was not made solely by Riverland staff at it’s three locations in Austin, Albert Lea and Owatonna. Many people gave input, including faculty, students and community members.

“We had town hall meetings, so we collected very detailed input from our three communities,” Atewologun said.

Davenport said the plan has many goals, but overall it asks one main question: How can organizers elevate excellence as one of the older learning institutions in the region?

One of the first things leaders did was identify a focus for each of the campuses.

“We tried to leverage the strengths that are already existing so we’re not duplicating,” Davenport said.

“We realize that we cannot really duplicate, or replicate every equipment and facility in every one of these three campuses, so we decided we’re going to focus on the existing strengths in each of the three communities,” Atewologun said.

Organizers hope to gain funding from the state over the next few years to escalate the excellence in each focus area.

A second goal is to increase and maintain enrollment.

“We want to maintain the students, and help them complete their goals because we want to be true to our mission, inspiring personal success to education,” he said.

Leaders hope to make up 4 percent of Minnesota State College and Universities System total enrollment by 2020. In 2014, Riverland accounted for 2.4 percent of MnSCU’s enrollment, but it was 2.7 percent in 2010 and 3.4 percent in 2004. College leaders hope the focused campuses will help attract students, along with partnerships with business and industrial partners to help with funding and tools to reach student goals.

Davenport pointed out one main thing businesses look for when coming to a town is the workforce that area has, and Riverland works to ensure its students leave with skills coveted by businesses.

“We are looking at new programs and always want to hear from the employers in the area what their needs are,” Davenport said.

Atewologun said those are only two of the many goals of the college’s strategic plan. Riverland has reached out to the local high schools to help them gain a better idea of the available resources.

The college has also set other plans in motion, such as its partnerships with other universities. Riverland joined the Minnesota Alliance for Nursing Education to create opportunities for students to get a four-year degree at Riverland.

“Now we’re expanding the opportunities for the students to complete the BS in nursing right here; they don’t even have to relocate,” Atewologun said.

Davenport said many of the classes have a hands-on focus to help students get a better idea of what they career will be going into. One program even has students interested in teaching work with children at a local elementary school.

“Students learn what it’s really like when they go on the job,” Davenport said. “They’ve had more of a taste of it from their classroom experience (than) from just a book or a lecture. They’re doing it.”

Riverland isn’t only for students just out of high school. Atewologun said they hope to focus on reaching more populations, such as returning, place-bound adults.

College leaders also hope to follow up with prospective students who looked but didn’t enroll at Riverland.

Davenport said Riverland is a place for people to realize their dreams.

“There is a place to go and to learn, and whether it’s learning to learn, or learning for a job, that we’re here, and we’re here for the people,” she added.

Atewologun noted the staff’s involvement in getting Riverland more publicity through joining outside groups. He pointed out Davenport’s involvement with Vision 2020. But it’s not just the staff who are involved. He said many of the public events they attend include alumni from Riverland.

“Perhaps that’s the greatest accomplishment, we don’t sing that song loud and clear enough, but we produce some imminent alumni,” he said.

The signs of growth are clear, as the college has produced more and more alumni by increasing its reach. Atewologun noted the college started with 138 graduates, and it now serves about 5,000 students in three large communities, which he said has added to the economic vitality of the area.

Riverland through the years

1940: Austin Junior College opens on the third floor of Austin High School Sept. 3 with 138 freshmen and a faculty of five full-time and four part-time instructors. The school is formed as part of the public school system, with Reuben Meland serving as dean and later president. Tuition was $4 per semester hour credit.

1951: The Austin Area Vocational-Technical School was established in the annex of Austin High School as a part of the public school system.

1968: On Nov. 4, The State Board of Education formally approves the formation of Albert Lea Area Vocational-Technical School, with Wayne Broecker as the director.

1985: Owatonna Higher Education Center opens as a way to create a seamless link between education, work and the community.

1992: Austin Community College receives $7.2 million for an expansion that includes the current main entrance and 33,000-square-foot library and renovations to bring the current building up to date for handicap accessibility and safety codes.

2008: Minnesota State Colleges and Universities acquires Owatonna College and University Center, with Gov. Tim Pawlenty signing it as part of the bonding bill in April. The sale is finalized Dec. 31.