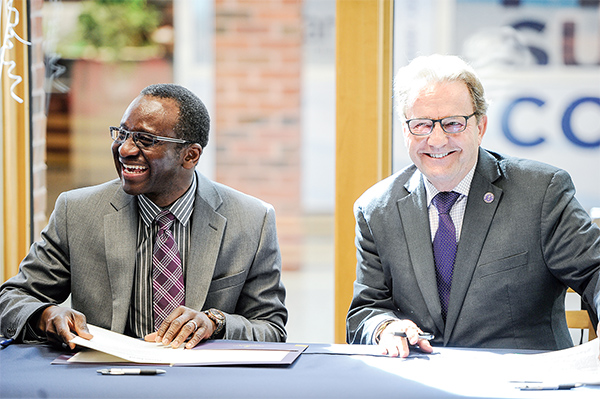 Students have another opportunity to cut costs and get a four-year bachelor’s degree at Riverland Community College.

The program is designed to promote completing an associate’s degree and a seamless transfer for Riverland students to Minnesota State, Mankato,’s bachelor degree programs. Minnesota State University, Mankato, President Richard Davenport and Riverland Community College President Adenuga Atewologun made the announcement official by signing a memorandum of understanding at a ceremony in the Riverland Austin campus library Friday afternoon.

Davenport was also excited about the partnership.

“What I think is thrilling and encouraging about that is we’re really reaching out to meet the students where they are,” Davenport said. “Riverland has such a good reputation that we know that if we bring our programs to Riverland, this will provide opportunities of access to a bachelor’s degree or maybe a master’s, or even a doctoral degree, the students might not have ever dreamt about.”

The program is mainly focused on business and accounting majors currently, but Atewologun hopes that in time it will be open to more majors. Full-time students in the program will get access to academic advising from both institutions to develop study plans that meet degree and course requirements for associate’s and bachelor’s degrees. Students will also have full access to student support services at both Riverland and Minnesota State, Mankato,, including financial aid, student activities, library services, computer labs, career services and more.

“The last thing we want to do is create a program where students fail, so we’re going to be 100 percent behind the students,” Davenport said. “Advisors on both campuses will be meeting with the students on a regular basis to ensure that success.”

Davenport noted the program is also designed to help students who are undecided in their major choose a path to follow, increasing the likelihood of graduation.

“I would think it’s students out there that maybe are undecided that are not quite sure what they want to do,” he said. “They’re not quite ready to go to a university campus, but they can stay home here within a 50 mile radius and get that degree.”

“We’re very committed as a university to reaching out, and this is what it’s all about,” he added.

Atewologun noted the program is designed specifically to help students get a degree in four years — two at Riverland and the following two at Minnesota State, Mankato,.

“That way they minimize the debt and they shorten their time rather than lingering around wondering what to do,” Atewologun said.

A guaranteed tuition scholarship plan will be designed to lock in the Minnesota State, Mankato, tuition rate that is in effect when Future Maverick Program, Transfer Pathway Agreement students begin their second year at Riverland and through their graduation from Minnesota State, Mankato,. Organizers hope to reach out to the community and alumnus to get donations to continue giving out scholarships.

“I hope the community really gets behind Riverland in order to provide the extra encouragement and help via scholarship so these students get through Riverland,” Davenport said.

Atewologun said some students have already expressed interest in the program, and he is excited to see where it will take them.