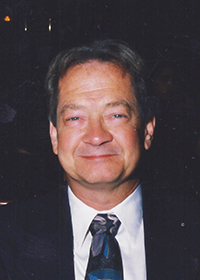 Bob was married to Linda M. Bissen Dec. 27, 1969, at Queen of Angels Catholic Church in Austin.

Bob was the service manager at Usem Chevrolet, where he worked for 31 years.

He was a member of St. Augustine Catholic Church, the Austin Lions Club and the Mower County Catholic Parishes Credit Union board. Bob loved music and was a member of the Austin Swing Band. He was a model train enthusiast, enjoyed antique cars and boats, and working on cars. He loved traveling and spending time up north fishing with family and friends.

Robert was preceded in death by his parents and a brother, Charles.

He is survived by his wife, Linda Johnson, of Austin; son, Benjamin Johnson, of St. Louis Park; sisters and brother-in-law Susan Radloff of Austin and DorisAnn and Ron Solseth of Shakopee; sisters-in-law and brothers-in-law Pat Johnson of Cottage Grove, Susan and Micheal Johnson of Rochester and Dawn and Dean Gerber of Burnsville; and nieces and nephews.

A funeral mass will be celebrated at 11:30 a.m. Saturday at St. Augustine Catholic Church with the Rev. James Steffes officiating. Interment will be at Calvary Cemetery.  Visitation will be from 5 to 7 p.m. today at Clasen-Jordan Mortuary and at the church on Saturday for one hour before the service.