Funeral services for Selma E. Bryan will be at 10:30 a.m. Thursday at Grace Lutheran Church in Albert Lea. The Rev. Janet White will officiate. Visitation will be from 5 to 7 p.m. Wednesday at Bonnerup Funeral Service, in Albert Lea as well as one hour prior to the service at the church. Interment will take place at Lakewood Cemetery. 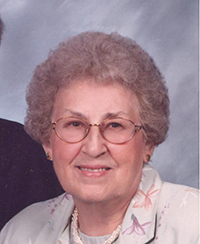 Selma was born Dec. 2, 1919, to William and Bertha (Bleck) Kuether in Wells. She attended and graduated high school from Minnesota Lake in 1939.

On May 13, 1942, Selma was united in marriage to James V. Bryan in Missouri. The couple was blessed with four children.

Selma worked as a dietician for the hospital in Albert Lea for 14 years. She also cleaned houses for people before she would go to work for the hospital. She was a member of Grace Lutheran Church where she was involved in circle. Selma was also a part of the VFW Auxiliary. In her free time Selma enjoyed sewing, quilting, camping and traveling. She loved to bake and was known for her delicious cinnamon rolls. Most of all, she loved spending time with her family.