Funeral services for Shirley A. Kenevan will be at 11 a.m. Wednesday at Salem Lutheran Church in Albert Lea. The Revs. Mark Niethammer and Steve Sampson will officiate. Visitation will be one hour prior to services at the church. Interment will take place at Hillcrest Cemetery. 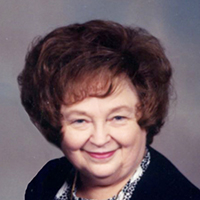 Shirley was born Feb. 18, 1936, in Albert Lea to Charles and Altine (Eide) Dilling. She grew up in the house that her father built in Albert Lea and graduated from Albert Lea High School in 1954. She attended Luther College where she was in the college band, and later in 1956 she graduated from the Minnesota School of Laboratory and X-Ray Technology.

In her free time Shirley enjoyed following all Minnesota sports, particularly the Minnesota Twins and Vikings. She liked to knit and was very good at Hardanger embroidery. She was a very caring, friendly and kind person that was liked by everyone. Most of all, Shirley enjoyed spending time with her grandchildren.

She is preceded in death by her husband, Richard; and parents Charles and Altine Dilling.

Shirley is survived by her children Katherine (Leroy) Ellingson of Conyers, Georgia, and Charles (Catherine) Kenevan of Blaine; grandchildren Steven (Stephanie) Thompson of Clemson, South Carolina, Samuel Kenevan and Joseph Kenevan, both of Blaine, and Adam Look of Ham Lake; as well as many extended family members and friends.