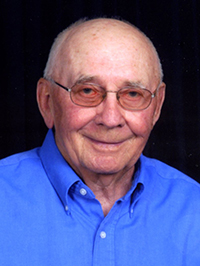 He was born March 11, 1928, in Waseca, the son of Stanley M. and Mildred (Rhode) Tollefson. He graduated from high school with the New Richland class of 1946. After graduation, Bud did carpentry for a short time before he entered the U.S. Air Force in 1950. He served his country for four years before his honorable discharge in 1954.

On April 16, 1955, he was united in marriage to Kathryn Johnson at LeSueur River Lutheran Church.

One of Bud’s many passions was music. He played with the “Melody Men” band for more than 30 years. He also had a great talent for fixing things until they were “good enough.”

He was a member of LeSueur River Lutheran Church, serving many years as duo-custodian along with his wife, Kathryn, usher council member and he enjoyed  playing on their softball league in earlier years.

He also enjoyed snowmobiling, hunting, gardening and a good game of horseshoe or golf. He enjoyed  and was an avid Minnesota sports fan, but Grandpa Bud was most proud, loyal and supportive while being in the stands at his grandchildren’s events.

He was preceded in death by his parents; and brothers Roger, in childhood, and Gene.

Memorials in lieu of flowers may be sent to Epilepsy Foundation of Minnesota and/or U of M Amplatz Children’s Hospital Heart Dept.