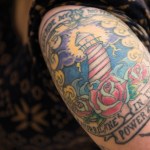 Tribune Photo Editor Colleen Harrison also has a tattoo for her mother on her arm incorporating a lighthouse in a storm, roses and a Maya Angelou quote. “My mom is one of the strongest people I know, so I wanted all of the elements of the piece to represent that.” 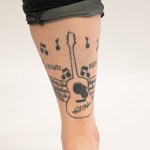 Harrison has about 15 tattoos and got her first one when she was 18. Her two favorites are the ones she has for her parents. The one representing her dad is on one of her legs. He was a musician — so a guitar and musical notes are incorporated — along with a quote from “To Kill a Mockingbird,” a book they read together when she was a kid. She got the tattoo after he passed away in 2008. 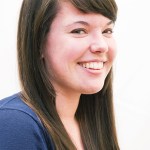 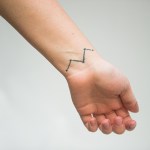 Tribune Special Sections Editor Hannah Dillon has a tattoo on her wrist of the constellation Vulpecula, which is the little fox. “Foxes are one of my favorite animals. I got the tattoo in March 2014 with my best friend at Infinite Ink Tattoo & Piercing in Hopkinsville, Kentucky. She got a similar tattoo, though hers is of the constellation Draco, or the dragon.” 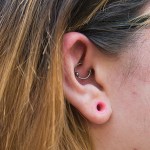 Dillon got her daith piercing done in March 2014 at Almost Famous Body Piercing in St. Cloud. 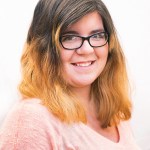 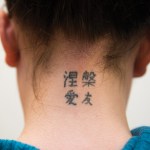 Tribune graphic designer Kim Ehrich has a tattoo of Chinese symbols on the back of her neck. The top two ctogether mean nirvana, or ultimate bliss. The bottom left means love and the bottom right means friends. “I got this tattoo with my childhood best friend. She has the exact same tattoo on the back of her neck. We wanted something to bind us together. The top word was our attitude and outlook on life. Love is for our familes and friends is for the two of us. We have been inseparable since fourth grade.” 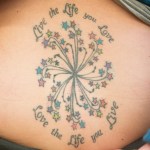 Ehrich also has a live, life, love tattoo on her lower back that represents a “rebirth”’ of her life. “I went through a stage in my life that I was proud to overcome. I was 20 when I got this tattoo. It’s a reminder to me to ‘Live the life you love, and love the life you live.’ I designed the star shape and wanted it spiralling to show that I was spiralling to the top and reaching for the stars after my hard time.” 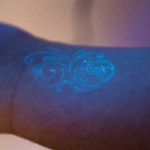 Ehrich also has a tattoo on her wrist that she got with her best friend, Ashley, that is only visible under a UV black light. “We would always go to the bowling alley on Thursday nights and would have the time of our lives. We have been close friends for six years and wanted to remind ourselves that we are always going to have each others backs, even if we can only see it under a black light we will always remember that it’s there.” 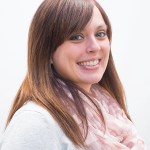 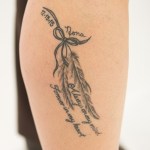 Tribune Business Manager and accountant Lisa Foley has three tattoos and got her first one in 1999 when she was 36. This one is on her leg and is in memory of her sister, Noni, who passed away in 2013. 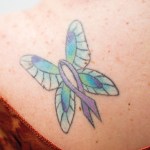 Foley also has a butterfly on the back of her shoulder that represents her family and all the different cancers they’ve had. “Each color is for every different type of cancer: colorectal, liver, lung and prostate; and lupus.” 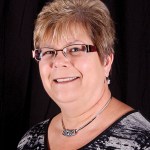 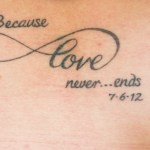 Tribune Account Executive Michele Beyer has a tattoo on her lower back in memory of her dad, who passed away in 2012. It’s her first one and she got it in August when she was 48. 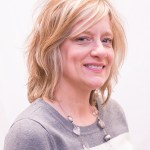 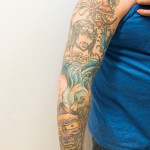 Tribune Mailroom Manager Rich Mirelli has two sleeves of tattoos along with a tattoo on each of his legs, two on his neck and on his ribs. He got his first tattoo when he was 19. The sleeve pictured illustrates his life story. 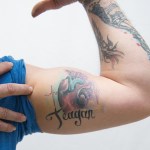 One of Mirelli’s other tattoos is for his son Teagan. He was on life support for five days at St. Marys when he was 1 1/2 months old. One of his lungs was 90 percent filled with fluid and the other was 70 percent filled. He was back in two weeks later with pneumonia. “He fought strong and survived, so I got the heart with lightning around it and the heartbeat monitor line.” 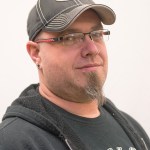