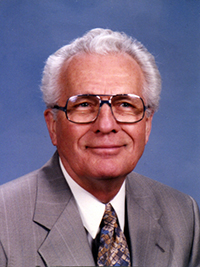 He was born in Minneapolis Feb. 24, 1922, to Lawrence E. Haase and Ellen (Halling) Haase. The family moved to Lake City where Vern attended Lincoln High School, graduating in 1941.

Vern enlisted in the Army Oct. 14, 1942. He then attended Dunwoody in Minneapolis from October 1942 until August 1943, studying radio repair.  He took his basic training at Camp Crowder, Missouri. It was at Camp Crowder that he married his high school sweetheart, Evelyn Wegner, Oct. 30, 1943.

He served as a radio operator with the 3254 Signal Service Company throughout Normandy, Northern France, Ardennes, Rhineland and Central Europe campaigns for a period of 18 months. He supervised a crew of six men in maintaining contact between advance station and headquarters. He received his honorable discharge as a staff sergeant Dec. 8, 1945.

After being discharged Vern returned home to Lake City and rejoined his wife, Evelyn, and their son, Ronald, who was born while Vern was overseas. He worked at Wise Hardware as a manager trainee under the GI Bill.  He later worked for Ferrin’s Furniture in Red Wing as a salesman. While living in Lake City a second child, Moni Rae, was born.

Vern was preceded in death by his parents Lawrence and Ellen Haase; his father- and mother-in-law Albert and Mary Wegner; and three brothers-in-law, Fred Fick, Curtis Zillgitt and Sam Morton.

Vern will always be remembered for his contagious smile, charm and his many ways to make you laugh just by being “Vern.” His family will miss him dearly.

Memorial services will be at 2 p.m. Tuesday at Fourth Avenue United Methodist Church in Faribault with the Rev. Dennis Tamke.

Memorial visitation will be from 5 to 7 p.m. today at Boldt Funeral Home in Faribault and also at church for one hour prior to the service on Tuesday.

Visit boldtfuneralhome.com for information and the guest book.