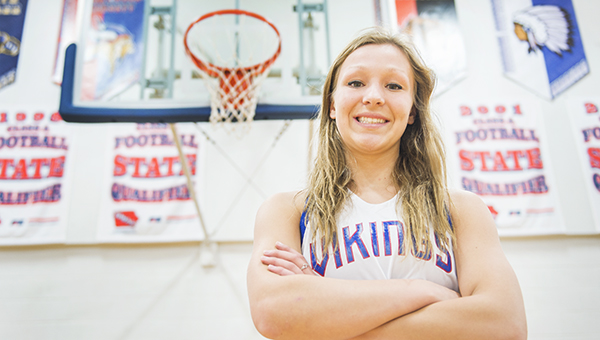 Northwood-Kensett junior Hattie Davidson was selected as the Tribune’s All-Area girls’ basketball Player of the Year. She led the Vikings to a 19-5 record and posted area-highs in scoring and steals. — Colleen Harrison/Albert Lea Tribune

NORTHWOOD — An arsenal of skills in the paint and on the perimeter made Northwood-Kensett’s Hattie Davidson a threat everywhere on the court.

Davidson showcased post skills her freshman season when she averaged 11.7 points and 9.5 rebounds per game to lead the Vikings in both categories.

However, her skills as a guard were untested. Davidson shot one 3-pointer that season and missed it. 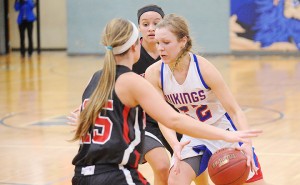 Hattie Davidson of Northwood-Kensett splits defenders before she scored her 1,000th career point on Jan. 30 during a 68-37 win over Nashua-Plainfield. — Micah Bader/Albert Lea Tribune

As a sophomore, she took 69 shots from beyond the arc and made 16.

This season as a junior, Northwood-Kensett coach Daryl Love transitioned Davidson to the perimeter, and she made massive strides. While leading the Vikings in scoring for the third straight season, Davidson buried 59-of-144 shots from 3-point land, which made her one of only three players in Class 1A to make 59 or more 3-pointers with an average over 40 percent.

“Her outside shooting is what’s really come along the most,” said Love. “She puts a lot of time in on her own working with her shooting motion.”

Davidson is the Tribune’s All-Area girls’ basketball Player of the Year.

Not only did Davidson lead Northwood-Kensett and the Corn Bowl Conference in 3-pointers made and 3-point percentage — counting those who made at least 25 shots from long range — she also averaged 20.2 points to lead her team, the conference and the Tribune’s seven-team coverage area.

“She’s a very goal-oriented person,” Love said. “Whatever she sets her mind to, she’s going to get it done.”

Along with a stellar percentage from beyond the arc, Davidson led the Vikings by shooting 50 percent from the field.

Northwood-Kensett finished the season with a 19-5 record, and Davidson surpassed 1,000 career points on Jan. 30 during a 68-37 home win over Nashua-Plainfield.

“It was a good year for us,” said Davidson. “I think it motivates us to work hard, especially in the offseason to have something to look forward to next year.”

Davidson’s freshman season was her sister Maren’s senior season for the Vikings. This winter, Maren played her second season for the Rochester Technical and Community College women’s basketball team but made the trip to see her younger sister break the scoring barrier on Jan. 30.

“She was right there after the game sprinting to give me a hug,” Davidson said. “It means a lot to me to have her support.”

The win over Nashua-Plainfield was also a milestone for Love. It was his 100th career victory.

“It really pushed the team not only to help me but to get the win for coach,” Davidson said. “It was pretty amazing reaching that goal at the same time and having someone to share it with.”

This spring, Davidson will compete on the Vikings track and field team. Last season, she qualified for the Class 1A state meet in three individual events and a relay. She took third in the 400-meter dash, fourth in the 200, 12th in the high jump and was part of the 800 sprint medley relay team that finished ninth.

This summer Davidson said she plans to attend basketball camps at Wartburg College and the University of Northern Iowa and will play on the North Iowa Fire Amateur Athletic Union team.

Through three years of varsity competition, Davidson has 1,128 points. She is 397 points behind Northwood-Kensett’s career scoring leader, Kate Hartman, who has the record at 1,525.