When amateur boxing was golden in Albert Lea 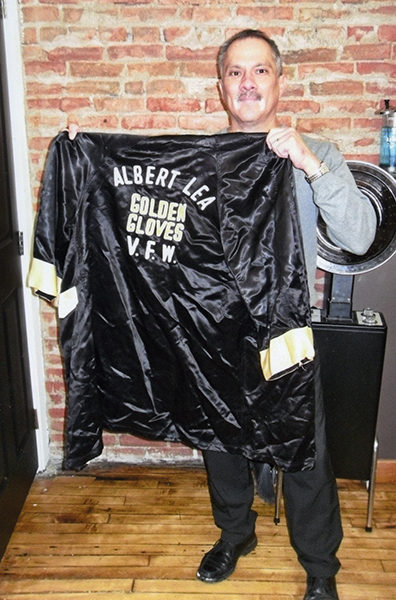 If someone mentions the sport of professional boxing — also called prize fighting — most people would probably say they have never followed any type of boxing and have had very little or actually no past interest in it.

Some of us from the “older generation” may have a passing memory of a few high-energy and popular world boxing champions like Muhammad Ali, Joe Lewis, Sugar Ray Robinson, Ken Norton and Archie Moore, just to name a few. These fighters were in a time where professional boxing was said to be in an era of fighting perfection, beauty and artistic. All these former professional boxers were mostly motivated by prize money, fame and fortune.

The promoters arranged the fight schedules, controlled the gate and the spectators would bet on the fight result. Often professional boxing was then associated with the “mob,” fixed fights and shady characters. Presently, professional boxing is suffering from lack of high-caliber fights and doesn’t have a high appeal like it used to do with the emergence of mixed martial arts fighting on TV and many other amateur and professional sports options.

There is also another category of boxing called “amateur boxing” which currently can be found at the collegiate level, Olympic Games and local levels. Basically, amateur boxing is governed by a different set of rules and regulations from professional boxing and has no prize money connected with the results. The boxing coaches, trainers and any helpers are all volunteers and most receive no pay.

Probably unknown to most Albert Lea area residents, about 40 years ago a by-gone era of amateur boxing was “golden,” referring to the Golden Gloves Boxing Club that existed in Albert Lea from about 1972 to 1979. The local club was started by the late Jesse Jimenez in 1972, who was a licensed coach by the Golden Glove Association of America with about nine fighters ranging from 7 to 20 years old. Jimenez financed the startup of the local Albert Lea Golden Glove Boxing Club basically at his own expense and a determination to keep Golden Gloves boxing active and alive in the area. The Albert Lea Golden Glove Boxing Club provided big local entertainment events for many years and captured the interests of the boxers, trainers, managers and area spectators.

Jimenez has a storied history in his own career of amateur boxing. He started boxing at about the age of 8 with the Easton Golden Glove Boxing Club. Jimenez boxed throughout his teenage years and continued to excel in his amateur boxing career when he joined the United States Air force in 1954 at 19, winning many boxing matches in the 152-pound (welter weight) division. His last amateur fight was in 1957 in the Air Force at 22 in West Palm Beach, Florida.

The top years for the Albert Lea club were from 1977 to 1979. Even though most boxing matches were in the local vicinity, the Albert Lea club traveled many miles to boxing matches in Wisconsin and Michigan and to regional and Minnesota state tournaments, usually held from December through March. The local club closed after 1979 because of lack of interest in the new generation of kids and other area boxing area clubs closing up. Nationally, Golden Glove boxing is still flourishing. The Albert Lea Tribune gave excellent coverage of the Albert Lea Golden Glove club in the years it was active with sports writer Tom Kuamme covering the results in his “Sports Scope” articles.

Historically, Golden Glove boxing began in 1923 with the first clubs in New York and Chicago.  The national Golden Glove Boxing Club was formed to help youth and promote amateur competition for boxing tournaments with a sole material award of a “tiny golden glove” metal going to the winners, thus the name Golden Glove. Golden Glove boxing has no connection with high schools or college athletics but is a program unto itself.

After a few years, Golden Glove boxing expanded to Minnesota and was open to all non-professional fighters 16 years old and over and to U.S. citizens. There were eight weight divisions from flyweight to heavyweight. Fights consisted of three, two-minuterounds with headgear.

The local Golden Glove fighters hopefully would win regional events usually held in Mankato and move then on to the Upper Midwest Tournament in Minneapolis with the winners moving onto Chicago and eventually to New York. Besides the Golden Glove club in Albert Lea, some other local clubs were in Austin, Mankato, Fairmont and Wells-Easton.

The Golden Glove boxing clubs don’t promote fame or fortune for the boxers. They just fight for pride and a little “Golden Glove” metal. In addition, the men running the Golden Glove clubs are role models for the young men, teaching discipline, competitiveness, lessons of life and lastly about winning and losing.

Jimenez also had many assistant coaches over the years with Vern W. Rasmussen, Harold Kenny and Lonny Broitzman to name a few. The Albert Lea Golden Glove Boxing club held its practices in the basement of the now Marion Ross Performing Arts Center with the actual fighting matches done in the “ring” of the former Albert Lea Armory on Washington Street.  Funding for the club relied on local sponsors with some being the Knights of Columbus, VFW and the Eagles Club, contributing money, equipment and traveling expenses, which then got their club names on the boxer’s robes. A few local Golden Glove fighters were Rick Kinney, Tony Fisher, Rick Broitzman, John Abergo, David Lynch and Clint Newton. David Lynch was the National Amateur GG champion in the middle weight class (165 pounds) in Greensboro, North Carolina ,in June 1979.

The boxing ring used by the Albert Lea Golden Boxing Club was originally purchased from Vern Gagne, who at that time was a professional wrestler and promoter in the Twin Cities area.  The ring was also often rented to other area Golden Glove clubs to cover the local club expenses. At one time the ring was rented by Muhammad Ali Productions for a professional fight promotion in Minneapolis with legendary Howard Cossel announcing the fights.

John Abrego, the son-in-law of Jimenez, who boxed for the club in the 1970s, still has the original boxing ring in storage and is planning to start up a new Albert Lea Golden Glove boxing club sometime in 2016.