Funeral services for William R. May of Clarks Grove will be at 10:30 a.m. Friday at St Theodore Catholic Church in Albert Lea. The Revs. Timothy T. Reker and Robert Schneider and Deacon Mike Ellis will officiate. Visitation will be from 4 to 7 p.m. Thursday with a prayer service at 6:45 p.m. Interment will be in St. Theodore Catholic Cemetery. Military honors will be accorded by Albert Lea area veterans groups. 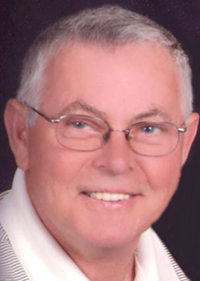 William Raymond May, 64, passed away of natural causes Monday, March 2, 2015, in Clarks Grove.

William R. May was born Sept. 6, 1950, to Raymond and Bonnie May in Jefferson, Iowa. He was raised in Adams and graduated from Adams High School. He served in the United States Army from 1970 to 1972 as a paratrooper.

He was married to Donna Blaser Jan. 10, 1970, at Sacred Heart Catholic Church in Adams. They made their home in Clarks Grove where they raised their five children.

Bill enjoyed serving the community as a volunteer fireman, Clarks Grove city councilman and Boy Scout leader. He was guided by his faith and was an active member of St. Theodore Catholic Church as a sacristan, eucharistic minister and in the Knights of Columbus. One of his passions in life was the Clarks Grove Hardware Store. Making his friends and customers laugh and making sure the people he served were taken care of was his priority and far outweighed ever selling any hammer or screw.  He also enjoyed playing cards, drinking Coke, being frugal, chopping wood and being a general handy-man to anyone in need of plumbing repairs and other odd jobs. He enjoyed his semi-annual “fishing trips” with his brothers where playing cards and talking smart were top priorities of the weekend, and spending time with his family and friends.

Bill was preceded in death by his father, Ray May.