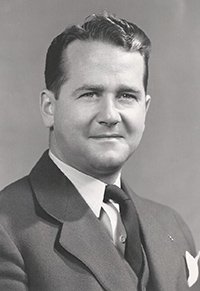 Bill was born Feb. 19, 1914, to Catherine (Fitzgerald) and William P. Shea in Bath Township. He grew up in Albert Lea and was a lifelong member of St. Theodore Catholic Church. He graduated from St. Theodore High School and went on to attend St. Mary’s College.

Bill Shea served in the Army Air Corps during World War II. He was awarded the Silver Star and the Air Metal for flying 23 combat missions in a B24 against Japanese targets in the South Pacific. He was also awarded Campaign Stars for participation in the Battle of Buna and the Battle of the Bismarck Sea. Upon returning from overseas Bill was stationed in Tucson, Arizona, where he married Jeanne (Ahern) Shea Feb. 19, 1944. After the war they returned to Albert Lea.

Bill owned and operated Shea’s Ice Cream Store for 20 years. He later was a district sales manager for AAA for 10 years. Bill was actively involved in many organizations over the years, including the Knights of Columbus 3rd and 4th degree, Golden Kiwanis, Elks Club, Meals on Wheels, VFW and the American Legion. Bill was a proud Irishman and an avid golfer.

Memorials are preferred to the charity of the donor’s choice.