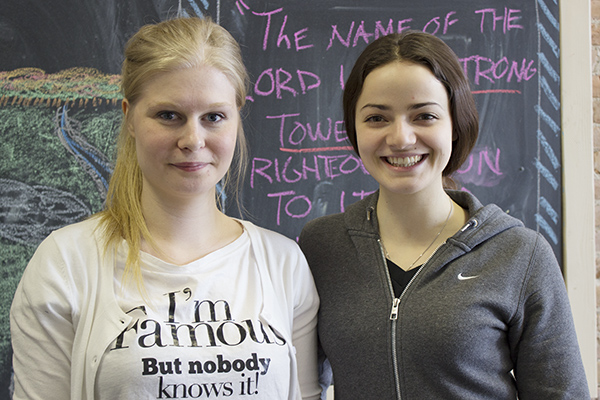 For the last 15 years, Youth For Christ’s The Rock in Albert Lea has been putting the intern in international.

A drop-in center is where students can come to Youth for Christ’s The Rock after school and have a place to be until 5:30 p.m. when the center closes, according to The Rock’s Director of Operations Robin Gudal. 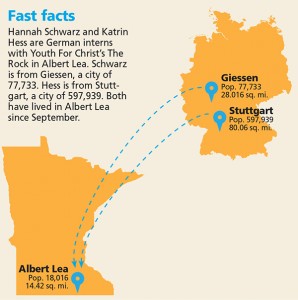 Gudal, along with Rick Miller and Robert Modderman, oversee the German interns. Gudal takes care of scheduling, Miller does the communicating with the German Youth For Christ and Modderman does spiritual development.

This year, The Rock has two interns in Katrin Hess and Hannah Schwarz. They arrived in September and are planning to stay in the United States until this summer.

Miller said many of their interns do their internship after graduating high school but before going to a university.

Hess and Schwarz applied for an internship with the German Youth For Christ, and they were able to pick what country they wanted to go to but not the city. Miller said Youth For Christ is in over 120 countries.

So far the experience has been going well for Hess and Schwarz, but there have been a few bumps in the road — and one of those bumps was how they got down the road. Schwarz said it was hard to get used to the car the interns have to drive, which was donated to the Youth For Christ’s The Rock, Gudal said.

Both Hess and Schwarz said the language was a bit of a stumbling block. Hess said she learned English in school, but it’s different to speak it outside of the classroom.

Hess is staying with Pam and Doug Ruble, and she said her host family used their iPad’s translation abilities to help bridge any gaps between German and English.

Schwarz is staying with the Rev. Kyle and Laura Fever. She said Kyle knows how to read German and put labels all around the house with the German and English equivalents of the object, to help her know where everything was.

Hess said the American lifestyle is something she had to get used to, mentioning that she’s eaten a lot of pancakes. She said she liked the extreme weather change as it doesn’t get very cold so fast in Germany.

The interns have a daily schedule, and Hess said most of their time is spent working with kids in the drop-in center.

One preconception Hess and Schwarz had before living in the United States was that Americans were all unhealthy. However, Schwarz said while some people eat a lot of fast food, people cook at home, and it’s similar in Germany.

Schwarz also said she’s getting used to everything from banks to pharmacies having a drive-thru.

Hess said she’s noticed that Albert Lea is a lot more spread out than cities in Europe, but a lot of people know each other and are connected.

Youth For Christ’s The Rock is open from 12:30 to 5:30 p.m. Monday through Friday, year-round. Any child is welcome to come to the drop-in center regardless of religious affiliation.