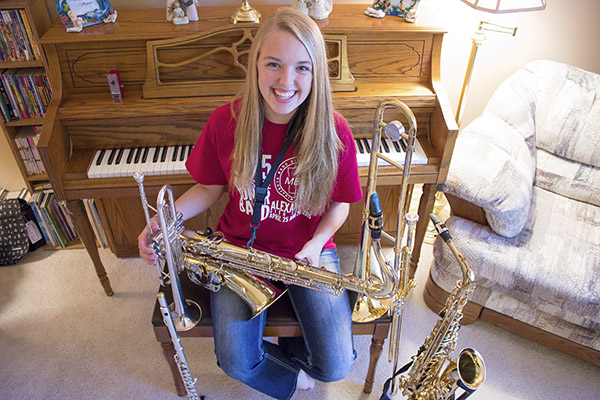 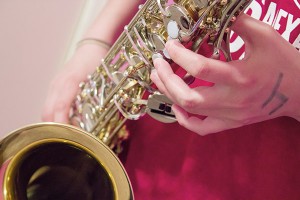 One of the instruments Grace Chalmers plays is tenor saxophone, which is the instrument she played at the Minnesota Band Directors Association State Honor Band on Friday and Saturday. – Hannah Dillon/Albert Lea Tribune

While Chalmers can play a plethora of instruments, her prowess on the tenor saxophone got her into the Minnesota Band Directors Association State Honor Band. Chalmers was in the grades six through eight honor band. There is also an honor band for students in ninth and 10th grade.

The honor band was on Friday and Saturday in Alexandria. Chalmers practiced with the band from 8:30 a.m. to 4:30 p.m. on Friday. There was some more practice on Saturday, followed by a concert.

Out of it all, Chalmers said her favorite part was the sectionals. As she was the only tenor saxophone player, Chalmers worked with the alto saxophones. She said she enjoyed the time working together to improve.

Chalmers said the experience was incredible, and was amazed at how quickly the concert came together.

She found out she was going to be in the band in early February after auditioning in December. The auditioning process involved sending recordings of scales and etudes to the MBDA, and Chalmers auditioned for both trumpet and tenor saxophone.

When the news came that she was in the band, Chalmers was shocked.

Besides the MBDA State Honor Band, Chalmers has been in three other honor bands. She was in the Southeast Minnesota Middle Level Honor Band in Austin for two years, once on trumpet and once on tenor saxophone. 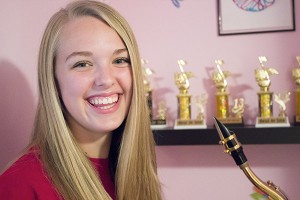 Grace Chalmers stands in front of a shelf in her bedroom with her Best in Site awards from solo/ensemble contests. She has won seven awards since fifth grade, four of which were this year. -Hannah Dillon/Albert Lea Tribune

She has also been in the Southeast MBDA Honor Band, which was held in Rochester. Chalmers played the trumpet for this band.

The state honor band is the only honor band Chalmers has had to audition for. The other three honor bands were director-nominated.

“We’re incredibly proud of our daughter,” Neil Chalmers said, noting that Grace Chalmers practices hard every day to be at the level she is at.

Grace Chalmers is in two bands at the high school, the eighth- and ninth-grade band and the ninth- and 10th-grade band. She is also in the Jazz 1 and 2 bands.

Besides playing in school bands, Chalmers has played for other events, such as church services, school plays and funerals.

When Grace Chalmers isn’t playing music, she runs track in the spring and cross country in the fall. She is also involved at her church in the handbell choir.

Looking to the future, Chalmers said she will continue to play music and hopes to participate in the MBDA ninth- and 10th-grade honor band next year.