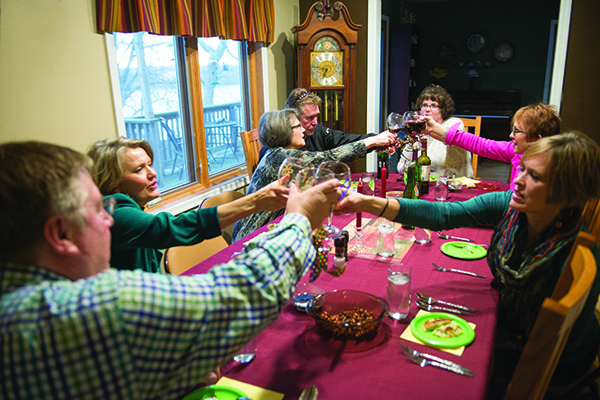 The Fine Mowines potluck group toasts before digging in during a gathering in March at Bill and Ann Howe’s home. The group is one of several that formed as part of the Blue Zones Project. – Colleen Harrison/Albert Lea Tribune

Once a month for the last five months, groups of Albert Lea residents have come together to share fellowship, recipes and healthy living.

The groups — called moais — were formed as part of the Blue Zones Project that began last fall.

“It’s an opportunity to facilitate relationships and help people make connections,” said Stacy Palmer, engagement lead for the the Blue Zones Project. “It’s about people getting together to positively support one another.” 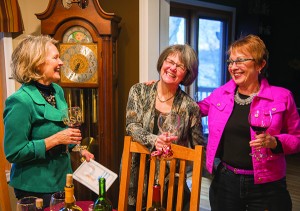 From left, Carol Larson, Becky Tennis Hanson and Jean Eaton share a laugh during one of their group’s monthly moais. The group got together and decorated their own wineglasses during one of their first meetings. – Colleen Harrison/Albert Lea Tribune

National Geographic explorer Dan Buettner came up with the idea after visiting with people from Okinawa, Japan, which is home to one of the Blue Zones, or areas across the world where people live the longest, Palmer said.

Buettner discovered that in Okinawa people belong to a moai — or group of people — when they are born, she said. The moais stay together for a lifetime, supporting each other through marriage, children, deaths and other celebrations or challenges throughout their lives.

“They said that one of the reasons why they’re healthy and happy is because they have that kind of support,” Palmer said.

In Albert Lea since the Blue Zones Project began last fall, between 30 and 35 moais have formed. Out of that number, about half have been potluck moais, where people meet regularly to share healthy food in each other’s homes or other places. There have also been winter walking moais and purpose moais.

Palmer said the different moais have brought people together with similar interests and goals. Many did not know each other before they were placed in a group but have since found support and friendship.

At a potluck moai gathering in March at the home of Bill and Ann Howe, Albert Lea residents Jean Eaton and Becky Tennis Hanson talked about how their group formed.

Eaton said when she and Hanson decided to get involved with a potluck moai, they wanted to have their own group that they could invite their friends to attend.

However, on the night of the Blue Zones Project similar interests who they did not have strong relationships with.

Since then, each month a different member has hosted the group at his or her home, and each month the group members bring wine and food related to one of the Blue Zones to their get-togethers.

Many also invite their spouses. If everyone were in attendance there would be about seven couples.

“Becky and I wanted to have our own moai, but this is so much better,” Eaton said. “It just really clicked.” 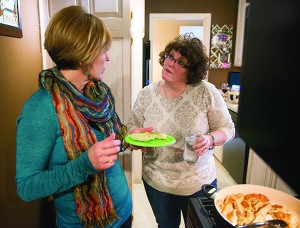 Julie Nafzger, left, and Ann Howe talk while finishing up in the kitchen during a Japenese-themed moai. – Colleen Harrison/Albert Lea Tribune

In March, the group followed a Japanese theme. There was everything from appetizers and soup to a main dish of Japanese tacos.

The group calls themselves the “Fine Mowines” — which pokes fun at their love of wine.

Eaton said she has enjoyed getting together and trying new healthy foods that she probably wouldn’t have tried on her own.

Bill Howe said one of his children commented on how his wife’s cooking has improved since they started the moai. She tries the new recipes with the family as well.

Other members of the group said they have learned that it doesn’t have to take a long time to make healthy food.

The fellowship and support from people with similar goals are some of the main reasons why the moais were initiated.

“It’s about people getting together to positively support one another,” Palmer said. “The fact that they’re in a Blue Zones moai means they’re supporting their efforts to be well — physically, mentally and spiritually.”

Several other moais are also meeting across the city, including members of three churches that came together.

Palmer said their intention was to try out the moais together and then eventually integrate the idea into their own churches, whether it be with meals, classes or walking.

The walking moais kicked off unofficially in the winter with walking groups inside Skyline Plaza and Northbridge Mall, but will officially kick off at 9 a.m. May 9 at Fountain Lake Park.

Palmer said the event will start near the gazebo, and there will be two groups.

One group will take a route around Fountain Lake, while another will take a shorter route downtown.

After each group has completed the walk, people will have the chance to win prizes, including restaurant gift certificates to Blue Zones-designated restaurants.

People who register ahead of time on the Blue Zones website for the walking moais will have a chance to win the latest Fitbit.

“I’m excited to have people form relationships that will continue,” Palmer said.

Some of the walking moais formed when Blue Zones was in Albert Lea in 2009 are still ongoing.