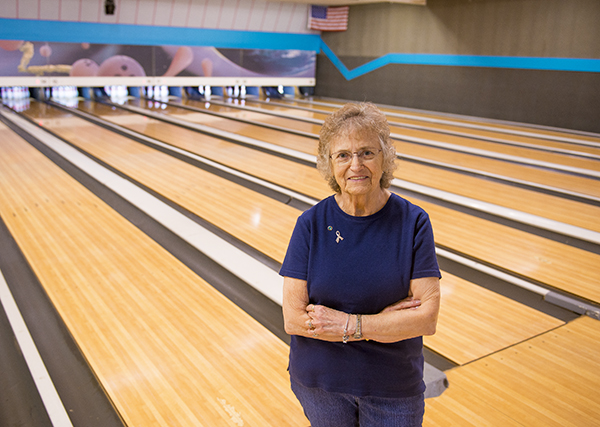 What began in junior high school in the mid-1950s has paid dividends for an Albert Lea woman.

After about 60 years off and on as a bowler, Pat Johnson was inducted into the Minnesota State United States Bowling Congress Association Hall of Fame at the end of March. She was recognized for meritorious service in bowling associations and leagues.

Johnson said when she started bowling in junior high, she did so because she had to choose between two or three sports. She noted bowling gave her a chance to get out of school and at that time was played through the Girls Athletic Association at a bowling alley on Washington Avenue.

After finishing school, she said she stopped playing the sport for a while, until picking it back up again in the mid-1960s as a way to get out of the house.

She started playing on multiple leagues and at one point played six days a week, including tournaments on Saturdays and Sundays. While she has played in women’s leagues, she also played in mixed leagues with her husband, Donnie.

Johnson has served as the Albert Lea Women’s Bowling Association director in 1980, treasurer in 1987 and secretary in 1991, among other duties.

A three-time cancer survivor, she was the chairwoman for Bowl for the Cure and made numerous craft items for the events to help raise donations.

In addition, she was a state delegate for about 15 years and a national delegate for five years. She bowled for 30 years in national tournaments, going to places such as Las Vegas and Reno, to name a few.

Johnson said the sport has given her a way to make lasting friendships.

She still bowls two days a week, on Mondays and Wednesday mornings.

Loren Kaiser of Holiday Lanes, who is also a member of the Hall of Fame, said he nominated Johnson because of her dedication to the sport, despite health-related issues.

Johnson and her husband have one daughter, Debbie Christensen, who also lives in Albert Lea. When she’s not bowling, she enjoys making crafts, crocheting and knitting.