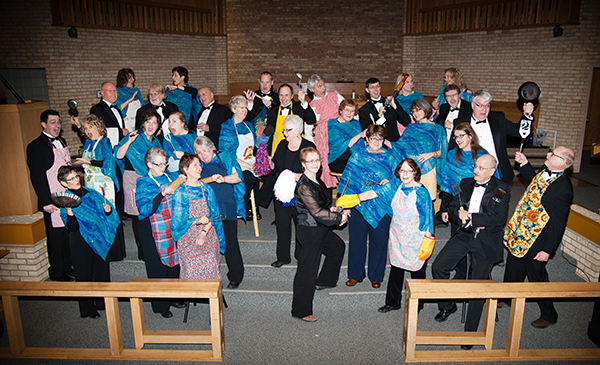 The Albert Lea Cantori will present its 43rd annual spring concert at 3 p.m. Sunday at United Methodist Church in Albert Lea, according to a press release.

The concert opens with “Lullaby” by Daniel Elder and “Goodnight, Dear Heart” by Dan Forrest with text by Samuel Clemens. Following will be a piece called “The Lamb” by Bryan Greer, accompanied by John Bangh on clarinet and Wendy Walker on the flute.  That portion of the program will end with Benjamin Britten’s “Rejoice in the Lamb” with soloists Sherry Seberson, Diane Heaney, Mark Dundas, and Stuart Ness, accompanied by Gail Thurnau.

The second half of the program will feature songs about food. The choir will serve up delightful music beginning with John Rutter’s “Banquet Fugue” from The Reluctant Dragon followed by “The Pie Carols” featuring pies such as pumpkin, apple, cherry, rhubarb and lemon meringue.

The final piece will celebrate Peter Schickele’s 80th birthday with P.D.Q. Bach’s cantata “The Seasonings  – (1 ½ tsp.)”. Soloists will be Paul Rehmke and Stuart Ness along with an assortment of unusual instruments including the shower hose, kazoo, train whistle, mailing tube and traditional instruments of piano and violin. The humorous work will serve up a delightful and funny portion of food sure to delight taste buds. Director of the Cantori is Eileen Nelson Ness and accompanist is Gail Thurnau. The concert is open to everyone and a free-will offering will be taken.