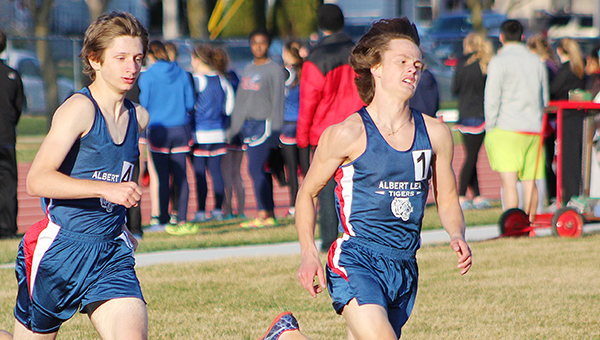 Tyler Anderson, left, and Jackson Goodell compete in the 800-meter run Friday at Austin. Goodell won the race in 2:12.3, and Anderson finished second in 2:13.29. — Lon Nelson/For the Albert Lea Tribune

Producing the top eight finishers in the boys’ 800-meter run and a gold and silver in the girls’ 100 wasn’t enough to propel either of Albert Lea’s track and field teams past Austin.

The Tigers fell 83-62 in the boys’ division, and the girls lost 116-28 Friday at Austin’s Larry Gilbertson Track.

Fellow distance runner Caleb Troe won the 3,200 in 10:20.45, which was two seconds faster than his time in the team’s season opener on March 31 at Faribault, according to Albert Lea coach Kevin Gentz.

“That was phenomenal,” Gentz said. “He’s come out running very well, not just physically but mentally as well.”

Troe added a time of 2:04 as his split for the 4×800-meter relay team, Gentz said, which was about eight seconds faster than meet’s fastest runner in the open 800.

Troe worked in the offseason to shave seconds from his best times as part of Albert Lea’s cross country team in the fall and the swimming team in the winter.

“I talked to some of his swimming coaches, and they said he was the hardest worker they had,” Gentz said. “We were just glad he went out for it to stay in shape.”

Despite the cold weather, Gentz said his team was in high spirits.

“I was happy to come away from a day like today seeing an enormous number of kids with smiles on their faces and a strong commitment to running,” he said.

The Albert Lea girls’ team won two events and finished as the runner-up in five.

“We were just excited to get out and have an outdoor meet,” said Albert Lea coach Margo Wayne.

Along with her fourth-place finish in the 200, Albert Lea’s Dora Ogunkanbi finished 0.29 seconds behind Dup to take second in the 100.

Because the meet was rescheduled from Thursday, Albert Lea some team members who were unable to attend because of a jazz band concert.

“We lost a few athletes who had previous commitments, but we understand that,” Wayne said.

Next, the Tigers will compete at 4 p.m. Tuesday at Rochester Mayo.

Albert Lea’s only home meet will be 4:30 p.m. May 12 against Winona and Mankato East. 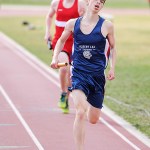 Caleb Troe of Albert Lea heads into his second lap on the first leg of the 4×800-meter relay Friday against Austin in Austin. — Eric Johnson/Albert Lea Tribune 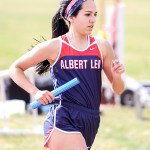 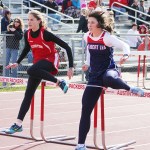 Fran Eckstrom of Albert Lea leaps over a hurdle Friday at Austin. Eckstrom competed in the 100- and 300-meter hurdles. — Lon Nelson/For the Albert Lea Tribune 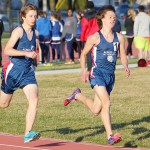 Tyler Anderson, left, and Jackson Goodell compete in the 800-meter run Friday at Austin. Goodell won the race in 2:12.3, and Anderson finished second in 2:13.29. — Lon Nelson/For the Albert Lea Tribune