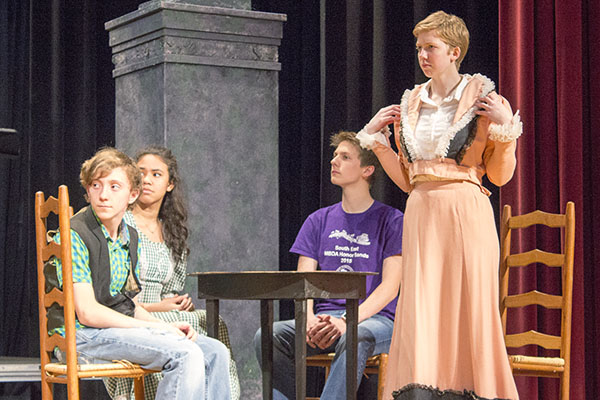 Student actors at Albert Lea High School will get a chance to play matchmaker this weekend with their newest production.

Albert Lea High School will be presenting Thornton Wilder’s “The Matchmaker” as its spring play.

“The Matchmaker” follows Dolly Levi, a matchmaker, and Horace Vandergelder, a miserly merchant. Vandergelder hires Levi to help him find a wife, but little does he know that Levi aims to become his wife herself. 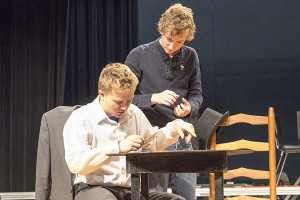 Luke Sundblad, left, plays Horace Vandergelder, one of the main characters of “The Matchmaker.” Pictured with him is Logan Petersen, who plays Malachi Stack. – Hannah Dillon/Albert Lea Tribune

The play will be directed by Dylan Kaercher. Kaercher has been active on the Albert Lea theater scene: He’s acted in plays at the Marion Ross Performing Arts Center, helped with costumes for the high school’s production of “Into the Woods” and directed and wrote his own Christmas play, which was shown at the high school last winter. Kaercher is also a choreographer.

Kaercher said he hasn’t directed a school program since 2012 and he’s having fun stepping into that role again. He’s never been involved with “The Matchmaker” before but acted in “Hello, Dolly!”, which is based off of the same play as “The Matchmaker.”

He said the cast is talented and self-sufficient and they can build their characters without much outside help.

“The Matchmaker” is a farce, or a play that is highly exaggerated for humor. Kaercher said a play like this is a good change of pace for the cast, as it isn’t what they’re normally used to. 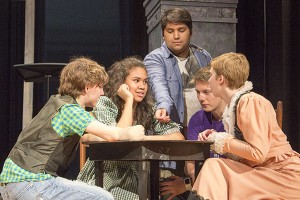 He said the students are enjoying the play and learning a lot as they go. However, as the play was written in 1953 and was based off of another play from 1842, Kaercher said some of the jokes had to be reworked as they’re so old they aren’t funny anymore.

Despite this, Kaercher said he believes this production of “The Matchmaker” has a good modern twist and helps bring the play into the 2000s.

“The Matchmaker” will be at 7 p.m. Thursday through Saturday in the high school auditorium. Tickets are $7 for adults and $5 for students.