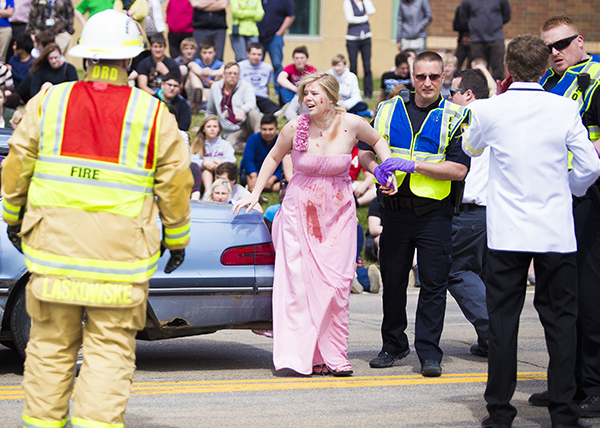 Albert Lea High School senior Tori Helgeson is helped away from the scene of a mock crash Wednesday on Hammer Road next to the high school. A number of students particpated in the simulation to warn against the dangers of drunk driving. – Colleen Harrison/Albert Lea Tribune

While experience may be a helpful teacher, nobody wants to learn about the effects of a car crash by being involved in one.

Student groups hope a mock crash staged at Albert Lea High School on Wednesday could take the place of experience to teach students about the dangers of distracted driving.

During school on Wednesday, 24 students died every 15 minutes. The Every 15 Minutes program website said this is to symbolize that someone dies in the U.S. every 15 minutes from an alcohol-related crash.

When a student died, a police officer went into the classroom and read the student’s obituary, which was written by the student’s parents, and the student was removed from the classroom, Officer Ted Herman said. The student returned with white face makeup to signify they had died and weren’t allowed to speak with anyone for the rest of the day. Herman said the deaths were also announced over the PA system.

Senior Anna Waltman, senior Tori Helgeson, junior Sam Ellis, senior Emily Ortiz, senior Connor Larson and junior Schafer Overgaard were the actors in the mock crash. Larson was acting as a drunk driver and was in a vehicle with Helgeson. Waltman, Ellis, Ortiz and Overgaard were victims who either died or were unconscious.

Throughout the course of the mock crash, Waltman, Ellis, Ortiz and Overgaard were removed from their vehicles. Some of the students were taken away by an ambulance, some by a hearse from Bonnerup Funeral Service and some by the Mayo One helicopter. Larson was escorted from the scene in the back of a police car.

Herman said the firefighters and EMTs were responding almost exactly as they would in a real car crash. In this mock crash, the top of the car with the four students inside was cut and peeled back to allow for easier extrication, Herman said.

Stacey Overgaard was watching his son, Schafer, participate in the crash from the sidelines.

Overgaard said that even though he knew the crash was fake, it still felt very real and he was becoming very emotional when he thought about how this was something that could really happen.

His son found out he would participate in the mock crash a month ago, Overgaard said. His daughter also participated in a mock crash, but the weather was bad enough that the crash portion was cancelled and he didn’t get to experience it then.

Overgaard said he praised the school for doing the mock crash to show students that all distracted driving — both drunk driving and texting while driving — has consequences. He also said his son would learn a great lesson and would be able to share his experiences from participating in the mock crash.

Senior Gabe Minear was also watching from the sidelines. Minear helped with the Every 15 Minutes program and was one of the students instrumental in coordinating this year’s mock crash.

Minear said the mock crash started with student council officers and they asked Herman if it was something they could do. Herman said it would be time-consuming, and Minear said it took almost a year to get everything coordinated. During that time it also had to be kept secret from the rest of the student body.

Minear said watching the crash was emotional. He said it was hard to see Ortiz be pulled from the vehicle and to watch Larson get arrested and put into a squad car.

Besides just impacting the student body, Minear said he thinks the mock crash could impact the entire community and show what distracted driving can lead to.

Today, the students who participated in either the mock crash or the students who died every 15 minutes will hear from a drug and alcohol counselor as well as Rita Shea, a speaker from Kasson who lost some of her family to an alcohol-related crash.

Herman said the school does a mock crash once every five years so a new group of students witnesses each crash.

Herman said the mock crash took a lot of community effort and donated money. This is his fourth time working with the Every 15 Minutes program, and he said it really helps students think about drinking and driving. 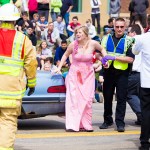 Albert Lea High School senior Tori Helgeson is helped away from the scene of a mock crash Wednesday on Hammer Road next to the high school. A number of students particpated in the simulation to warn against the dangers of drunk driving. – Colleen Harrison/Albert Lea Tribune 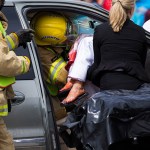 A victim in a mock drunk driving crash is pulled from the wreckage Wednesday outside of Albert Lea High School. – Colleen Harrison 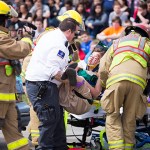 Senior Anna Waltman is placed on a stretcher during a mock crash demonstration. The crash was demonstrated in front of Albert Lea High School students to remind them to practice safe and sober driving. – Colleen Harrison/Albert Lea Tribune 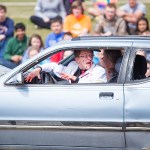 Senior Connor Larson played the role of a drunk driver on his way home from a friend’s house following prom during a mock crash Wednesday outside of Albert Lea High School. – Colleen Harrison/Albert Lea Tribune 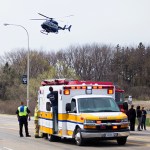 Mayo Clinic Health System in Albert Lea participated in the mock crash Wednesday outside of Albert Lea High School by sending the Mayo One helicopter to the scene of the crash. – Colleen Harrison/Albert Lea Tribune 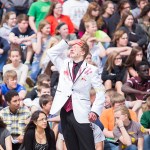 Albert Lea High School students watch as Connor Larson plays the role of a drunk driver during a mock crash Wednesday outside of the high school. – Colleen Harrison/Albert Lea Tribune 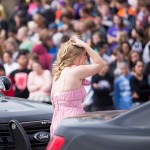 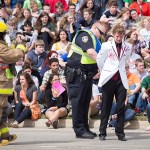 Connor Larson, playing the role of a drunk driver, is handcuffed during a mock crash Wednesday. The crash was meant to remind students about the statistic that someone dies every 15 minutes from an alcohol-related accident in the U.S. – Colleen Harrison/Albert Lea Tribune 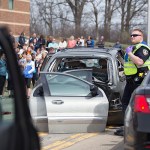 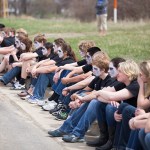