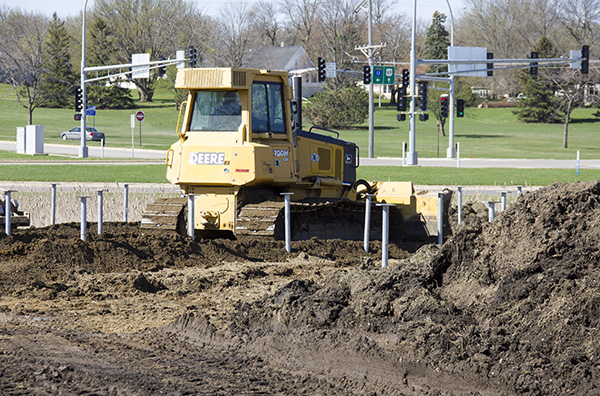 Work began last week on the installation of a photovoltaic solar array on the southwest part of the property of Albert Lea Seed House. – Sarah Stultz/Albert Lea Tribune

System to produce a quarter of business’s electricity

Jumping on an opportunity to reduce its energy dependence, the Albert Lea Seed House is installing a system of solar panels to generate electricity.

The 40-kilowatt photovoltaic solar array will be 60 by 80 feet when completed and will hook directly into the Alliant Energy grid, said co-owner Mac Ehrhart.

The system is being constructed on the southwest portion of the property and is expected to pay itself off in eight years with rebates, Ehrhart said.

“It will go some distance toward covering our electric costs,” he said.

Jim Wichmann, with the business, said the solar power specifically will provide for about a quarter of Albert Lea Seed House’s electricity. In addition to the main building, the company also has a warehouse, bins, seed cleaning and other equipment.

Initially, they had intended for it to be installed on the roof, but because of the load from snow, they figured out the roof wouldn’t be able to handle both. They went instead with a ground-mount system.

The men said they had to apply through a grant program for funding and were the only commercial project awarded last year.

Krueger Excavating started last week preparing the ground for the installation, and they intend to have it all installed by the end of this week.