An adventure in education 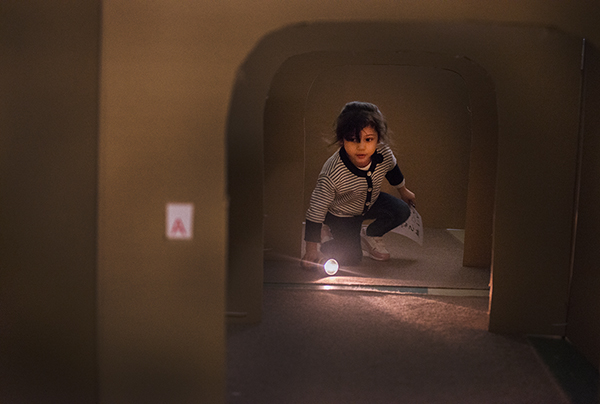 Keyla Fuentes Ayala goes on a scavenger hunt through a maze during open school activities Wednesday at United Preschool. The school had multiple activities set up for students in different rooms, all going along with the theme “Young Albert Lea.” – Colleen Harrison/Albert Lea Tribune

For two weeks out of the school year, United Preschool students get to experience open school.

That’s what Audra Beussman describes as a two-week program where United Preschool students get the chance to play and learn with students from another class at the school.

While normally there are two classrooms, during open school the students intermingle and select which rooms they want to play in. United Preschool has been doing open school for over 20 years, and each year the theme is different. Beussman said sometimes themes are brought back, but are usually different in some way.

This year’s theme is Young Albert Lea. Six classrooms were recreated into businesses that are represented in Albert Lea, and the students could play and act as either the employees or the customers.

One room was a hospital, dentist, eye doctor and physical therapist’s office. Another room was the fitness center. There was also a grocery store and a room featuring a Dairy Queen, McDonald’s and Jake’s Pizza.

The hallway also featured Albert Lea Lake at one end and the Albert Lea airport at the other, with the hall turning into a road. Beussman said the boys enjoyed driving cars up and down the hall and playing with airplanes while the girls preferred to play in the different areas.

The theme came about in regards to one of United Preschool’s goals, which is “Take care of our school.” Beussman said that goal goes further than just taking care of the actual school building, but also refers to the world, the environment and the community, and that’s what sparked the theme of Young Albert Lea.

Before spring break, the staff and students worked on creating signs, posters, light posts and street signs for the hallway. Most of the street signs featured names of streets where either a student lived or someone a student knew lived, Beussman said.

Open school started after spring break was over, but Beussman said students were getting excited even before they left for break. She also said staff was looking forward to coming back to school after a longer vacation, something she said can be difficult.

Despite open school being rooted in play, there is learning involved — and Beussman said students learn the most through play.

“We’re a community,” she said.

There are about 150 students at United Preschool from ages 3 to 5. The students attend school anywhere from two to five days per week for two to three hours per day. Registration is open for next year and applications are being accepted. 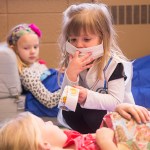 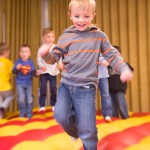 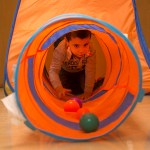 Isidro “Manny” Cavazos climbs through the tunnel of a ball tent as part of a fitness center Wednesday at United Preschool. – Colleen Harrison/Albert Lea Tribune 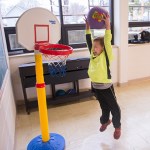