A memorial service for Anna Oberg will be at 2 p.m. Sunday at First Lutheran Church in Albert Lea. The Rev. John Holt will officiate. Visitation will be an hour and a half prior to the service at church. A private interment will be in Riverview Cemetery in Elmore at a later date. 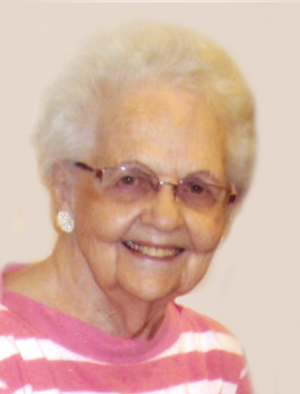 Anna Lucile (Olson) Oberg was born June 14, 1922, at the family farm two miles north of Elmore, the sixth out of five girls and one boy. She was baptized and confirmed at Shiloh Lutheran Church in Elmore, was a member of the Luther League and sang in the choir. She attended Country School District 108 two miles from their home. By the time she graduated from high school with the class of 1940 she had been elected the all-school president and was chosen to be the first Miss Elmore to ride on the float leading the Elmore band at the Mason City Band Festival the following summer.

She graduated from Minnesota Business College in Minneapolis in 1943 with bookkeeping and secretarial degrees. Her first job was at Westinghouse Electric in Minneapolis as a secretary.

Gene N. Emerson and Anna L. Olson were married Feb. 17, 1943, at the home where she was born. The Rev. Mondale officiated. To this union three boys were born. Gene had to leave on an oil tanker from the Pacific coast two weeks later. Anna moved to Long Beach, California, the next year and worked at Consolidated Steel Shipyards as a secretary.

When the war ended they bought their first car, packed their belongings and headed back to Elmore. They opened the Spic and Span Dry Cleaners in 1944 in Elmore. In 1956 Gene died as a result of being burned over 75 percent of his body. Anna ran the cleaners for two years but with the cost of hiring help, it wasn’t lucrative enough to support the four of them. She passed the civil service exam and worked at the Elmore Post Office at a temporary position.

The American Cancer Society and Dr. Menefee, the pathologist at Naeve Hospital in Albert Lea, gave her an opportunity to train at the laboratories at St. Marys Hospital and the clinic in Rochester to become a certified cyto-technician. She then moved with her three sons to Albert Lea in the winter of 1958. She scheduled her lab work so she could prepare and pre-screen the slides in the evening and early morning so she was able to work a second job. She started doing alterations for the stores downtown and in 1960 she bought Albert Lea Tailors located in the lower level of Albert Hotel.

Emil “Swede” Oberg and Anna Emerson were married April 11, 1964, at the First Lutheran chapel. To this union one son, Steven, was born. Swede was “Dad” to Anna’s three boys and Anna received the bonus of three daughters.

She taught herself how to monogram with a regular sewing machine and a hoop and did the names and emblems on all the athletic jackets in the area at home. She continued to do them for over 20 years.

She retired as a cyto-tech when Dr. Menefee retired in 1978. The manager of Leuthold Clothing asked her to start a tailor shop in the lower level of their building. She later sold it but continued to work as a tailor until the age of 86.

In spite of her busy work schedule, she always found time for things she enjoyed doing along the way. She enjoyed activities in whichever church she belonged to, teaching Sunday school for 35 years, all the womens activities, altar guild, sewing quilts, sewing five sets of paraments, the acolyte robes and covers for all the communion silver. She was elected president of the First Lutheran Church Women in 1998. It is hard to say which was her favorite pastime — gardening, sewing or bridge playing. She appreciated all the good friends she collected along her way.