Memorial services for Ardell M. Anderson, 90, of Albert Lea will be at 2 p.m. Friday at First Lutheran Church. The Rev. John Holt will officiate. Burial will be at Graceland Cemetery at a later date. Friends may greet the family one hour prior to the service at the church.  Online condolences are welcome at www.bayviewfuneral.com. 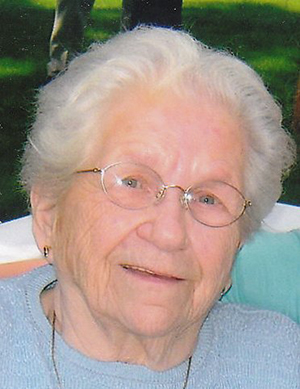 She was born Feb. 15, 1925, in St. Paul, the daughter of Russel and Hazel Isadore (Johnson) Finely. Ardell grew up in Minneapolis until her mother died during childbirth. She was then raised by her maternal grandmother on a farm west of Hayward. Ardell was baptized and confirmed at Hayward Lutheran Church. She attended school in Minneapolis and Hayward and graduated from Albert Lea High School.

On March 14, 1945, Ardell was united in marriage to Clifford Anderson in Madison, Wisconsin. She worked as a program coordinator for the handicapped at Woodvale. Ardell was a member at First Lutheran Church where she was active in mission circle, caring and sharing, quilting and writing class. One of Ardell’s hobbies with Clifford was doll making. Together the couple started Doc n’ Del Designs, specializing in making Father Christmases with vintage material. They sold the dolls from their home and at various art shows.

Ardell had many memories and happy times their business. She enjoyed baking banana bread, reading, writing, traveling and anything that involved her family. Ardell especially enjoyed Christmas, birthdays and tea parties.

Ardell was preceded in death by her parents; her husband, Clifford; grandparents, including her grandmother, Hattie Johnson, that raised her; granddaughter, Lily; great-grandson in infancy, Elias; great-granddaughter, Clara; and several aunts and uncles.

In lieu of flowers memorials are preferred to Peace and Power at First Lutheran Church.