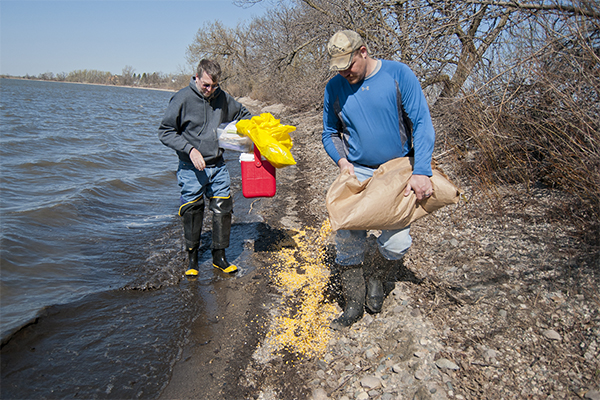 Bill Schuna, left, looks for bird fecal samples along the shore of Ocheda Lake as Kent Schaap spreads corn feed to bait migratory birds. The site yielded no fecal samples for the two DNR workers on Tuesday, but another site yielded the most fecal samples thus far in Nobles County. — Jackson Forderer/MPR News

The unprecedented avian flu outbreak has hit commercial poultry operations in several states, but none harder than Minnesota. Nearly 1.5 million turkeys in Minnesota have died from the virus or been killed to prevent its spread.

Exactly how the H5N2 highly pathogenic avian influenza is spreading so rapidly, however, remains a mystery. That is adding to the anxiety of turkey farmers and putting Minnesota’s nearly $1 billion turkey industry on edge. 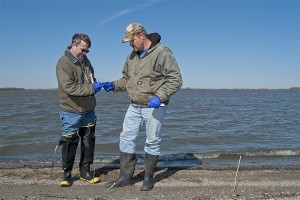 BIll Schuna, left, and Kent Schaap collect bird fecal samples along the shore of Ocheda Lake in Nobles County. Schuna and Schaap both work for the DNR and have been collecting fecal samples to be tested for the avian flu. — Jackson Forderer/MPR News

Among the farmers who are worried is Gene Brownfield, who raises turkeys in southwest Minnesota. With 50,000 birds ready for sale this week — a total investment of $350,000 — he is counting the days until they’re sold.

“It’s just the worry of getting them out,” Brownfield said. “Because you’re at the peak financial side right now.”

If influenza hits the flock before he sells the turkeys, his operation would be caught up in a financially devastating process.

Most outbreaks kill about a third of a flock before health authorities intervene. The toll on both turkeys and finances, Brownfield said, can grow fast.

At $7 a head, Brownfield would be out more than $40,000 under that scenario. But he could not sell the surviving birds as health authorities would require them to be killed to prevent the virus from spreading.

Although the federal government would reimburse Brownfield based on the appraised value of the surviving birds, that wouldn’t make up for the loss on the sick birds.

Dead birds are left in the barns to decompose, a process that takes about a month. It can be several more months before a barn is scrubbed and sanitized enough to start over. A normal cycle of producing three flocks a year drops to one or two at best.

Brownfield has no idea whether he’ll be next.

“The big problem is the randomness of it,” he said. “We just simply don’t know where it’s going to hit at any one time.”

Researchers are trying to find a pattern to the outbreaks but so far none has emerged.

Bird droppings are the main target of the investigation. Investigators believe infected ducks, geese and other migrating waterfowl are carrying the virus into the state. Finding the virus in a fecal sample would prove the theory but there’d still be the mystery of how the virus is entering turkey barns where measures have been taken to prevent its entry.

Department of Natural Resources employees are busy collecting waterfowl droppings near infected turkey barns. Or at least trying to.

They’ve had some luck at Lake Ocheda in southwest Minnesota’s Nobles County, home to one of the first farms infected.

“If you look closely you can see duck tracks all over in the sand,” he said.

To lure birds, Schuna and his DNR colleague Kent Schaap dumped corn there and waterfowl quickly found it. They got an easy meal, and Schuna got what he wanted. More than two dozen samples.

This is the best we’ve done, in one day,” he said.

If anything is going to help crack this case, Schuna said, it’s bird poop — a key source of evidence in avian flu investigations.

“If we get answers from this stuff, that’s what we need,” he said. “Everybody that’s involved in this is just wanting more answers.”

But so far there are no answers. Michelle Carstensen, a wildlife health program supervisor for the DNR, said no flu virus has been found in the nearly 400 samples tested so far. The agency plans to test another 3,000 samples.

“I’m hoping we wrap it up by the end of next week, that we’ve gotten our 3,000 in all these areas that we’re working,” Carstensen said.

But it’s not always easy to find samples. Just as the disease seems to hopscotch around the state, the droppings can also be frustratingly random. Despite his good luck at Lake Ocheda, Schuna struck out at the next two sites.

The best the researchers could do was dump a new bag of corn on the ground and check the next day.