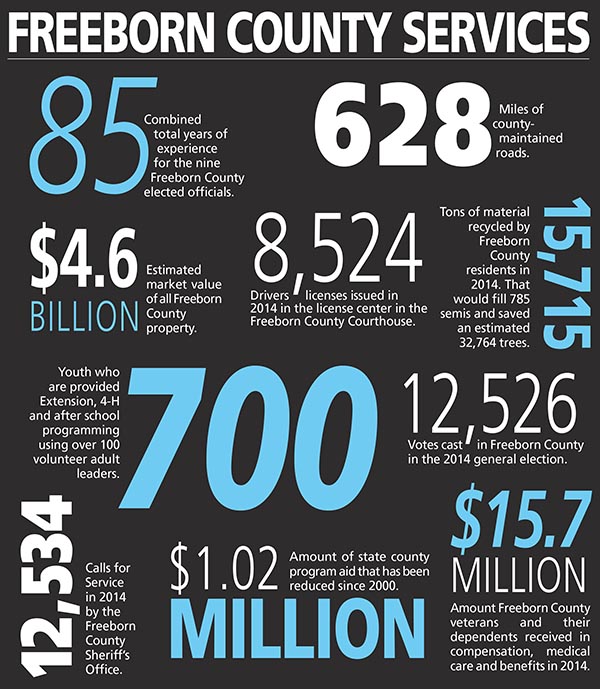 “County government is often referred to as the invisible or hidden form of government, but counties touch every Minnesotan whether they live in cities, towns or rural areas,” said County Commissioner Chris Shoff, who recently gave a State of the Counties address as acting president of the Association of Minnesota Counties. “County government is a part of every Minnesotan’s life, from birth records to death records and every important life moment in between.”

The Board of Commissioners passed a resolution Tuesday declaring April as National County Government Month.

The following is some statistical information on Freeborn County and some of the services the county provides:

• It costs $1 million per mile to reconstruct a county state aid highway and $250,000 per mile to overlay a road.

• There are 174 town and county bridges in Freeborn County

• An estimated half-cent sales tax would bring in an estimated $2 million a year for highway projects.

• About $67.8 million was spent in 2014 for support, health and social service programming in Freeborn County.

• The assessor is responsible for 22,031 parcels of property in the county.

• This department provides 75 percent of the funding for the Sentence to Service program, which completed 6,000 hours of community service work in 2014

• Freeborn County was the first in the state to establish a 16.5-foot buffer strip along the entire open ditch system to protect waters from pollutants.

• The county has given 49 loans totaling $527,000 to residents upgrading their septic systems.