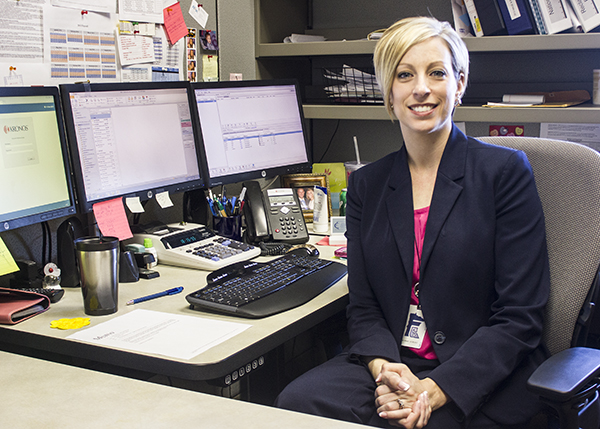 Albert Lean Candace Pesch is drawing on years of experience across the globe as she serves as Freeborn County’s human resource and benefits administrator.

Pesch, 38, began in October in the position, and prior to that worked in Court Services for the county for about a year and a half. But it’s her experience as the wife of a Marine that is most intriguing as she has lived in places across the world, including California, Hawaii, Washington, Paris and Bahrain.

Pesch handles day-to-day operations for the county’s more than 300 employees, including any employee issues that arise or questions dealing with benefits.

She said her days  never look the same, even when she starts the day with a schedule in mind.

One of the big projects she has worked on is entering in all of the employee data online into the Kronos program. Previously all documentation and benefits information was written out by hand.

Employees will eventually be able to go online and update their own information such as deductions.

“We’re removing human error and increasing efficiency and availability for the employees,” Pesch said. “That’s something I’m excited about.”

She is also working on lining up training for employees to fill gaps in technology or abilities, including use of Microsoft software and use of iPads.

“I want them to feel like they can be successful,” she said.

Freeborn County Administrator John Kluever said though the human resource position comes with a steep learning curve, Pesch has navigated through issues and learned the position.

“In this new position, she has quickly gained the respect of county employees and staff here in administration,” Kluever said.

Prior to moving to Albert Lea, Pesch had a varied background. She previously worked as a medical assistant and in organizational leadership in Bahrain at the U.S. Embassy, when her husband was stationed as a guard. She said she is now on the list to becoming a foreign services officer.

Despite all the opportunities available to her, she said she is excited about her job as human resources administrator and the direction her family’s life is taking.

Her husband is attending school to become a trucker, and her children are heavily involved in school activities.

“I never thought I’d end up here,” she said. “I thought a hospital was where I belonged because I really do love people. My love of people just took me another direction.”

She said the family enjoys living in Albert Lea and has enjoyed the warm welcome they have received in the community. They initially moved here to be closer to family.

When she’s not working, Pesch said she enjoys cooking and spending time with her family. She has recently started to enjoy gardening and landscaping.

Interesting fact: Pesch has lived all over the world, including France and Bahrain while her husband served in the Marines.