Funeral services for Dorothy E. Jacobson of Albert Lea will be at 10:30 a.m. Friday at Grace Lutheran Church in Albert Lea. The Rev. Janet White will officiate. Interment will be in Lakewood Cemetery. Bonnerup Funeral Service is assisting the family. 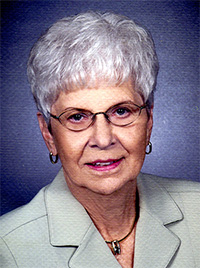 Dorothy was united in marriage to Carroll Thomas Jacobson on Aug. 15, 1946.

After their marriage Dorothy and Tom moved to Hollandale in 1948. Dorothy was a wonderful homemaker and a great cook who chose to stay home and raise their two daughters, Pat and Cindy.

In 1972 she started working part time for the Hollandale Post Office, becoming post master in 1978 and retired in 1989 under protest. She truly enjoyed her job, but Tom was ready to head south for the winter. They wintered 26 wonderful years in Sun City.

Dorothy will be greatly missed by her family which includes husband, Tom; daughters Pat and her husband, Ron Holtan, and Cindy Jacobson and her husband, Brian Peters, of Eagan; grandchildren Amy (Wayd) Wangen and their children Mya, Haley and Parker of Stewartville, Shannon Ostrowski and her son, Joshua, of Prior Lake, Jacob Peters of Chicago and Benjamin Peters of Eagan; niece, Vicky (Dave) Murphy, and family of Burnsville; nephew, Kevin (Caraugh) Bartness, of Inver Grove Heights; and Beverly Shandor, who was like a sister to Dorothy.

She was preceded in death by her parents Earl and Alta Bartness; brother, Earl Bartness; and sister, Phyllis Bartness.

Dorothy is greatly missed by her loving family.