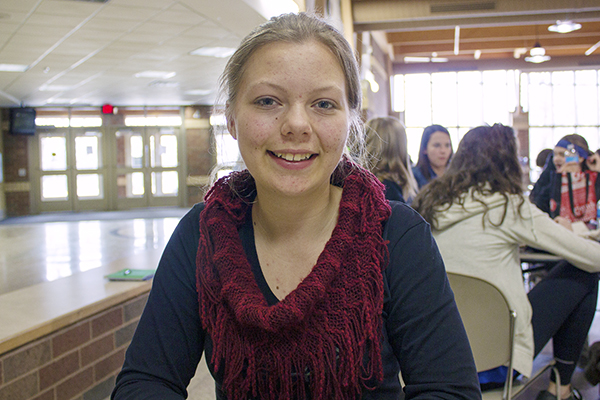 Jenny Rudemo, a foreign exchange student at Albert Lea High School, is from Stockholm, Sweden. She is staying in Albert Lea with Tom and Nancy Jones and their children. – Hannah Dillon/Albert Lea Tribune

One Albert Lea senior went on a 4,329-mile trip in September, and will do the same thing all over again this year.

The only difference is this senior was born in Stockholm, Sweden.

Jenny Rudemo is a foreign exchange student at Albert Lea High School. Rudemo, who is 17 but will be turning 18 over the summer, lives with Tom and Nancy Jones along with their third-grade children, Alexis and Spencer.

Rudemo is in the U.S. with American Field Service’s exchange student program. This year of schooling doesn’t count for her academically, but she wanted to do the program anyway for the experience and to get more fluent in English. 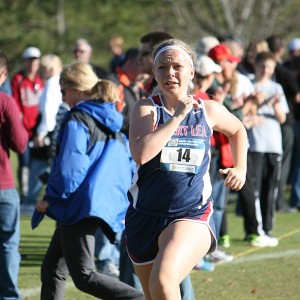 Jenny Rudemo has been active with school activities, including participating in cross country. She has also participated in track, the spring play and Youth in Government, among others. – Bryce Gaudian/Albert Lea Tribune

She arrived in the U.S. on Sept. 8. She flew into Chicago and went on an overnight bus trip to Minneapolis, where she had orientation with AFS and was then picked up by the Jones family.

The classes Rudemo have been taking are mostly fun ones, since the classes don’t count academically back in Sweden. Some of the classes she’s taken are photography, child development and yearbook.

In addition to her classes, Rudemo has been involved with the spring play, track, cross country, Youth in Government, Knowledge Bowl, Tigers’ Roar, the show and varsity choirs and was the manager of the dance team.

Rudemo said she’s been having fun in the U.S. so far, and her experience has blossomed recently. Now that she’s been in Albert Lea for a while she has settled in and made friends. She said when she first arrived it was hard, but it’s gotten better.

Some of the hardest times were around the holidays, and Rudemo said she got a bit homesick.

Back in Sweden, Rudemo has a mother, Annika; father, Niklas; and two sisters, 14-year-old Nikolina and 11-year-old Idun. Her family also has a dog.

While Rudemo, who also speaks some French in addition to English and Swedish, wanted to travel to the U.S. to develop her English fluency, she also wanted to experience the culture. Up until she came to the U.S., her only experience with American culture was movies.

Overall, Rudemo said American culture is was kind of what she expected. Some things were different, such as having to ask for rides. In Stockholm public transportation is much more readily available as it has nearly 800,000 people to Albert Lea’s nearly 18,000, and she said she had to learn that asking for rides was okay.

Besides spending time in Minnesota, Rudemo said she and the other exchange students at Albert Lea High School went on a trip to Hawaii. The trip, which was through Belo USA Travel, was from Feb. 14 to 21.

Rudemo, with a grin, said the trip was awesome and she was happy she to have the opportunity. There were programs each day of the trip but she said she still had a lot of free time.

After Rudemo returns to Sweden, she will have two years of high school left. She plans on going to college, but hopes to do some traveling in between if she has enough money. Rudemo currently wants to go to college for architecture or interior design, but she said she’s been changing her mind a lot about her future career. Essentially, she said wants to do something she finds enjoyable.

Interesting fact: Rudemo said her party trick is she can say the Swedish alphabet — which has three extra letters — backwards fairly quickly.