For paralyzed mother, the housing market is out of reach 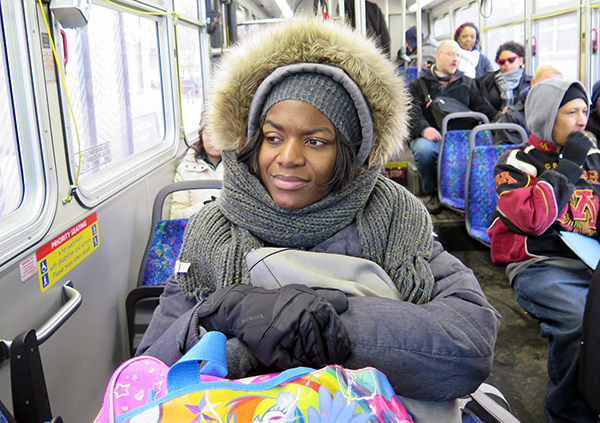 During her eight months living in a nursing home, Tanesha Johnson regularly rode the bus to meet her mom and her children in downtown Minneapolis. She felt it was too depressing for them to visit her in the nursing home. – Sasha Aslanian/MPR News

Imagine being 28 years old and living in a nursing home. Your mind is fine, but your legs don’t work because a man you barely knew shot you in the spine.

You live there alone because you can’t find an affordable apartment where you can be reunited with your two young children. Tanesha Johnson’s been living that life.

She moved from Chicago and was studying at St. Paul College to build something for her 5-year-old son, Tavaris, and 3-year-old daughter, Tanaya. The man who shot her, Larry Eugene Miller, is serving 16 years in prison. The criminal complaint says he was drunk and became upset when Johnson told him she’d seen someone steal his money. 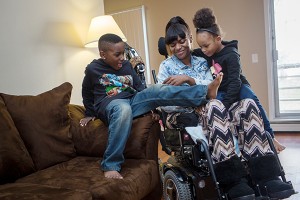 Tavaris, left, and Tanaya Chillis crawled onto their mother Tanesha Johnson’s lap so that the three could watch a movie together Friday in their Brooklyn Center apartment. In 2013 Johnson was shot in the neck and paralyzed. After living in a nursing home, she is trying to reunite her family, but struggles to find accessible, affordable housing. -Jennifer Simonson/MPR News

She awoke with a breathing tube, paralyzed from the chest down and needing an electric wheelchair. Her children went to stay with Johnson’s mother in her one-bedroom apartment in north Minneapolis.

“I really hated my chair,” she said. “I didn’t want to get in it. But it was my babies coming, they’d get into bed with me. They’d say ‘Mommy, you can’t walk?’ I got into the chair finally because I had to prove to them, just because your mommy can’t walk, doesn’t mean I still can’t be your mommy, and it doesn’t mean we can’t still have a good life.”

Johnson went to the Courage Kenny Rehabilitation Institute to learn the skills she’d need to cope with her new life. Nine months after the injury, she was cleared to go home.

But she had no home. The garden-level apartment she’d been renting had stairs.

“Inside of these institutions, they want to push you to group homes,” she said, recalling her conversation with one local housing non-profit.

“I keep reiterating to them, ‘there’s nothing wrong with my mental, it’s just my legs. I still want to be there for my kids. I still want to, that’s my family. I want to reunite my family.’ They just can’t understand that,” she said. “I’ve had people tell me to ‘look past my children.’ You can’t look past yours! Imagine not going home to them tonight.”

Johnson, with the help of her social worker, applied to 30 places: subsidized and market rate, non-profits and public housing with years’ long waiting lists.

Many of the apartments available to people with low incomes and disabilities are reserved for seniors, so it was a long, tough search.

Desperate, she signed a six-month lease for a two-bedroom market-rate apartment in Brooklyn Center. After she pays her $929 monthly rent, she has $121 left over. After living in the nursing home for eight months without her kids, anything was worth it.

State officials say this is not how the system should work.

“This is just a very heartbreaking story about what has happened to her,” said Alex Bartolic, director for disability services at the Minnesota Department of Human Services. “That is not what we want to have happen in this state.”

Minnesota wants to help people get out of institutions and live independently with their families, said Bartolic, adding that a proposal at the Legislature would create housing assistance for people living in institutions and group homes so they can spend it where they wish to live.

“Look at how long she stayed in a nursing facility. That was very expensive compared to her supports at home,” Bartolic said after reviewing Johnson’s story at the request of MPR News. “That’s one reason we’re trying to help people move very quickly because we can avoid some costs if we can help get people connected in the community. But our programs are pretty siloed.”

The Minnesota Housing Finance Agency said last month it received funding for 75 HUD vouchers for people with disabilities to help address this kind of problem. The agency doesn’t know yet how many people would potentially be eligible.

Bartolic said 94 percent of people with disabilities do live out in the community, and a federal grant called Moving Home Minnesota is geared to help the rest, people like Johnson.

Johnson applied to Moving Home Minnesota in December and it paid for her move and some basic furnishings for her new apartment. Bartolic, though, remains surprised by how little help Johnson got, especially with vocational training and income supports.

“She should not have to know how to navigate the system. Nobody who needs services should have to be the expert on the system,” Bartolic said. “Without knowing more about details. It think it’s probably that it really is hard finding affordable, accessible housing.”

The vacancy rate in Brooklyn Center where Johnson found her apartment is less than 2 percent. In the Twin Cities as a whole, it’s less than 3 percent.

If Johnson had been homeless, rather than living in a nursing home, her chances might have been better for landing family housing quickly.

She said she considered moving to a shelter with her kids but then decided to stick it out in the nursing home and keep applying for apartments after speaking with Beth Nelson Sather, a medical case manager at Hennepin County Medical Center. They discussed the risks to Johnson’s physical health, and the potential trauma to her kids.

The Brooklyn Center apartment is temporary because of the cost.

“Tanesha’s staying on those waiting lists,” said Nelson Sather, who updates a spreadsheet of Johnson’s apartment applications. “I think getting in subsidized housing would really alleviate the financial stress and burden that a $929 monthly rental payment is to Tanesha right now.”

Johnson says she was studying cosmetology and was certified in preschool education when she was wounded. The nerve damage from the gunshot forced her to choose a new line of work. She’s now taking online classes, hoping to become a social worker.

She hopes other parents with disabilities won’t have to fight as hard to find a place to live with their children.

She said she’s used to stretching her dollars. In the nursing home, she got only $95 a month to cover all her personal expenses. “I’ve survived broke in there. I’ll be able to survive broke out here and I’ll be much happier with my children.”