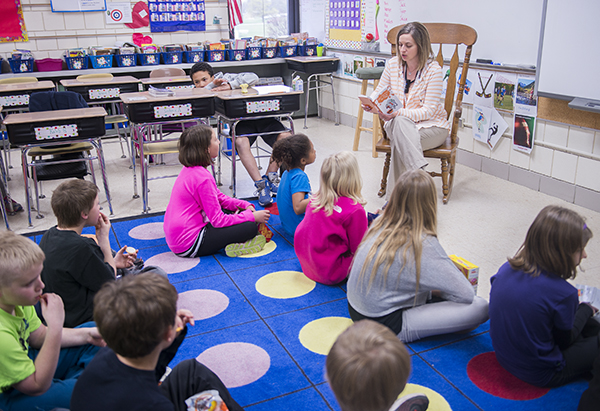 An art integration grant at Sibley Elementary School has helped create connections for both students and teachers.

In April 2012, Sibley received a grant from the Perpich Center for Arts Education according to Teresa Bergene, music specialist at Sibley.

Bergene said the grant works on integrating art into regular fourth-grade curriculum. The grant focuses on learning about Native American culture, and the students learned this in their regular classrooms as well as music, art and physical education classes.

The art integration matches closely to classroom standards, Bergene said. She said the program is supportive, and students can see a whole learning experience not just in their classrooms.

And this grant hasn’t just helped the students. Bergene said the teachers involved do a lot of collaboration and teamwork. She said it has been beneficial for all of the teachers and has created a closer-knit group.

Amber Jensen and Erika Youlden are two fourth-grade teachers at Sibley. In their classrooms, students read about Native American children and then compared and contrasted their lives to the lives of the children they read about.

The unit lasted for two weeks in March and helped students build background for the art integration.

In Blong’s class, students created their own symbols inspired by Native American works. They then created musical instruments that featured those symbols.

Blong said students maid drums and shakers out of papier-mache and beans.

In Wilson’s class, the students created their own dances and performed them for the class. Each dance had to have a specific number of steps and beats, and some steps had to relate to each student’s own culture. For example, Wilson said a group of baseball players created a dance, and included steps that demonstrated their baseball-playing background.

Jensen said the students got to experience culture they wouldn’t learn in a textbook and that the learning was more hands-on.

She said it is good awareness for the students, as they learn about traditions and celebrations that happen in the United States but aren’t part of everyday life.

Blong said he enjoyed watching the students absorb the material. He said he also liked working with other teachers. He said it gave the unit a different perspective and created a stronger curriculum.

Wilson said the students learned not just about their Native American culture but their own cultures and made connections.

“Most importantly, the kids enjoyed it,” Wilson said. “They had fun.”

While the grant was originally supposed to run for three years, Bergene said a fourth year has been added due to funding. The program will run to the end of the 2015-16 school year.

Sibley has received $7,500 per year from the grant for art integration. The school has another grant through the Perpich Grant Program for staff development.

For the past two years, Sibley has been a regional outreach school for southeastern Minnesota. The school has received $55,000 for staff development. 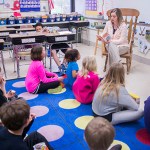 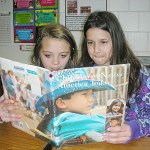 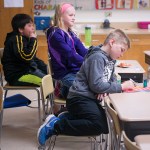 Students in Erika Youlden’s fourth-grade classroom listen to Youlden read during snack time Tuesday at Sibley Elementary School. Youlden’s class was one of the fourth grade classes that learned about Native Americans through a grant from the Perpich Center for Arts Education. – Colleen Harrison/Albert Lea Tribune 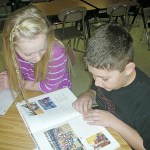 Fourth-graders Lara Westrum and Ian Latham read about children of Native Americans and summarize what they read as part of a Native American unit, funded by a grant from the Perpich Center for Arts Education. – Provided 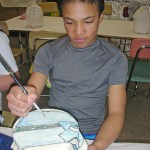 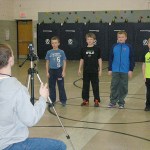